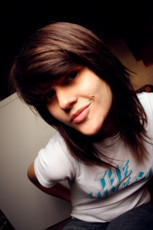 I like drawning, music and food, and the nightmare before christmas.

about drawning: things on this page are OLD. I completely forgot about FAC until I got a mail of it, five minutes ago.That means I improved the last 2 years, quite alot to be frankly. I hope to opload new stuff as soon as possible. Until then you can check some stuff out on my myspace: www.myspace.com/havanaxaffair(though, that's also not realy updated, lazy me.)

I like art, that's why I studied it the last 3 years, and going to study it in college. I'm also a bit into photography, again, check myspace!


About music: I grew up with it! My dad plays in a garage rock band, and my mom was a real punk in the early days.

Bands they got me into: The clash (dad's favourite!) The Cramps, Iggy and The Stooges, The Cure, The White Stripes, ACDC, Sex Pistols, Eels, The Datsuns, Jet, Nirvana, The Kids, The Libertines, Blur, Oasis, Black Rebel Motorcycling Club, and lots more. 4 years ago, my dad introduced The Hives to me, and until these day they remain one of my all time favourite band!

When I was about 12, the kid next door and I discovered The Ramones, which changed my whole life. I met people who checked this kind of music too, and thanks to them I dig: The Queers, Screeching Weasel, Chixdiggit!, Groovie Ghoulies, The Huntingtons, Beastie Boys, The Misfits, The bouncings Souls, Nerf Herder, The Bones, The Leftovers, Blink 182, The Dwarves, The Donnas, Descendents, Teenage Bottlerocket, The Riverdales, The Lillingtons, The Vapids, Give Up The Ghost, and lots more. (Lots of 'the's in this list!)

As you can see, I love music. I check out shows as many as possible, shows in big buildings, shows in basements and garages, it's all cool to me.

About food: I like food, food tastes good! That's all I have to say.

about the nightmare before christmas: favourite film since I was like 8 years old. At the moment I'm collecting all kinds of stuff that have something to do wit the movie. Let me know if perhaps you wanna get rid of your NBC merch!

Other things you maybe - probably not- want to know about me: I have a realy cool boyfriend, my favourite movie will probably be 'the nightmare before christmas' (I collect items that have to do something with the movie), I like Harry Potter, I'm not pretty good at sports, I don't smoke, don't realy drink, and don't do drugs, I have a little brother and sister, a realy stupid but cute dog, I dig zombie movies, mostly George Romero, I hava a shirt and toothbrush of the teenage mutant ninja turtles, beat that! I tried to play the guitar, but suck realy hard with it, I'm not realy a gamer but there's one game I'm crazy about: Kingdom Hearts, I secretly like a romantic comedy once in a while, and I have an obsession with all kinds of monsters and wienerdogs.


You're crazy if you read all this crap about me! But hey, I'm charmed!

i care not if you like kingdom hearts >_<! or if you have a boy friend <_< though thats not why im dragging you away <_<

i need to watch it... all i know is that it does rock from what ive seen.

hey thanks for the com!!!
It's the first time i do the grow(idk the word but i know what you mean)
T_T

Thanks T_T
But tell me if i say something strange with non-sense ok?
Today i was eating my bag,and the car spoke to me and told me,the apple is better with ketchup but i prefer be on a dino's head
Hem...if you see i say something like that tell me ok?

it's for that my english sucks T_T

Tell me i someone told me sometimes we speak french too in Belgique
Is that true?

oh yeah, and it's pretty awesome talking to someone from belgium- if you can, i'll trade you a request for language lessons!(i'm learning German and Bokmal at the same time) ;p...... seriously.
-raven
Go to page: