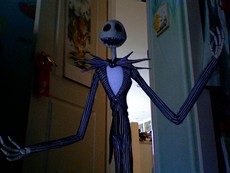 Jack decided to visit my house for a while, so here's a picture of him. (;


Well, I currently live in Atlantis, but we'll be vacationing to Neverland to visit my cousins. (mermaids)
It's weird, cause it doesn't seem like we live underwater because there r caves in the ocean floor that make big air pockets, (that's were we live) and we DO have technology! (gasp) The only thing I don't like, is that school somehow made it's way down here!!! )=
Besides from that, I really like Atlantis, and the only thing I don't like is that I moved away from my BFF, Rhys.
He's still on the surface, but because he's homeschooled, nobody really knows him. (cept his family and me) (=
The Things I like:
The Nightmare Before Christmas
The Corpse Bride
Disneyland
Knotts
Magic Mountain
Halo
swimming (duh)
Kingdom Hearts I and II
Crash Bandicoot (the super old ones)
Super Smash Bros. Melee (I want Super Smash Bros. Brawl)
Any Zelda game
Star Wars
Indiana Jones
Harry Potter
Chronicles of Narnia
Lord of the Rings
Eragon
Gladiator
The Patriot
Monty Python and the Holy Grail (and other British humer stuff like Fawlty Towers, Mr. Bean, Mony Python's flying Circus, etc.)
Calvin and Hobbess
Garfield
Peanuts
Shoe
Pearls Before Swine
Mother Goose and Grimm

K, my bro and I created this, so check it out!!! http://www.youtube.com/watch?v=qpHF3uxQXKw

Hey, can you do me a favor and send me a quick e-mail? I got a new computer (a MAC. YAY!) and I lost your address. I got iMovie and stuffs too but I don't really know how to use it -_-'

Oh, yah, and I saw Monty Python...ROFL!!!! The opening credits were hilarious! And the killer rabbit! And that knight in the beginning with no arms and no legs! HILARIOUS!!

Here's something to cheer you up. Flash Animation of THIS IS HALLOWEEN...STARRING THE KH2 CHARACTERS!!!

I know, but the school peoples rejected it...*crap*

I have some bad news. I wasn't admitted to SCHS. *CRIES* *Bawls like a baby*

OMG OMG OMG!!! KINGOFSOULS JUST SENT ME THE COOLEST LINK!!! YOU'LL HAVE TO SEE WHAT IT IS:

Unfortunatly, I can't see it because my computer doesn't run Window Movies...)=
So... do u think u can find it somewhere else?

Someday... shame it couldn't have been today, because I was home the entire day, but mom and dad weren't home, so I wasn't allowed to go over to anyone's house OR envite anyone over... Otherwise we would've been able to get together today and make funny KH movies n' stuff... )= 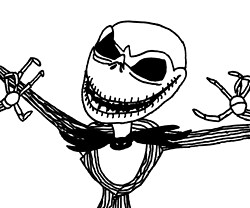