wtf, this shoot just erased everything that was written on here....frack you
vete a la verga fac, a ver si puedes censurar esto

Nooooo! I missed you yet again xD but the days in between the responses seem to grow shorter and shorter Lol! I find it interesting that you write a new journal entry what seems like every year haha

Until next time : D

Nooooo!! I wish i had seen your response a bit sooner xD This might end up being a bit like snailmail haha.

I had to read it. I was curious as to what you had written but it also surprised me as to how recent it was too. As i continued reading your update, i began to realize just how similar some of your struggles were to mine. Your words resonated with me and it was something that i was able to understand and sympathize with. I just finished reading your most recent one too and i must say, im quite proud of you o.o Its difficult to find a drive sometimes, especially when your faced with insecurities. Its something that ive always had trouble fighting against. I can honestly say that i won most of those battles, but those thoughts still linger and strike me down from time to time; not as much as before though, Thankfully haha. Its just a matter of being present and realizing your self worth; knowing that you possess the ability to do more with yourself and pave the way to prosperity. Overall, 2017 started off rough since my breakup with my ex girlfriend was still pretty fresh. That, and getting used to living with roomates haha it got uch better as the year transitioned. Bills were paid on time, i saved a decent amount of money, i got a promotion at work and i even traveled more often than usual. Yeah, 2017 was......pretty good actually. It seems like 2017 treated you good as well : 3 Makes me happy to know that!

I do agree, i still log on to this website from time to time for nostalgic purposes. I dont recall any bad memories with you either, though i will admit that i was pretty immature. Ugh, as i said in my last comment, the idea of it all makes me cringe Lol but when i really sit here and think about, i dont think i've ever taken the opportunity to actually get to know you as a person. I still recall your love for art as well as cosplay haha I just sometimes wish i was able to build better relationships with some of the people on this website. Ive met some pretty awesome individuals back in those days and sometimes i cant help but wonder what they are up to. Lol you know what else is crazy? I met my ex-girlfriend of 10 years on this website. Back in 2006 and we actually broke up on November 2016. fracking crazy, no? Lol

Overall, i hope you are doing well with yourself. Judging by your new update, you seem a lot more satisfied with yourself and your endeavors. Im happy for you!

As i said in my last comment, i hope that we can converse again as more awake and experienced individuals : 3

I also saw in your update that you made an instagram haha. If you're ever interested, you can always follow me on there! my username is pnutbutterporkchop! exactly the way its spelt!

You probably wont reply anytime soon given the fact that you've moved on with yourself...but i did want to mention that im sorry if....i ever disrespected you in anyway way Dx Ugh, i was such a desperate child at the time and the mere thought of some of the things i had said make me cringe to be completely honest with you lol but aside from all that, i do hope that the path you walk is full of fruitful endeavors my old friend! Perhaps one of these days, we shall converse again as more awake and experienced individuals!

Till then, push forward and walk tall!

You know; To be completely honest, im not entirely sure what possessed me to log back onto this site. Something had compelled me to do so. I guess it just has to do with the fact that i was sitting here and i began to reminisce about certain things from the past haha. Upon skimming through the comments on my profile, i had noticed that you were the second one on that list. I also took the liberty of reading your most recent update o.o and its kinda funny how it sort of correlates to some of my struggles during the year of 2016. It started off with some minor weight and more of it began to pile up as the year transitioned through. It was tough, but more than anything, 2016 serves as a reminder of what and what not to do. It had gotten me to the most weakest point ive ever reached in my entire life, and to be quite honest, i feel like im beginning to prosper from that pain. Little by little of course, as the path to success always requires a steady pace, for it is impossible to rush any sort of fulfillment. Judging from your story, i cant tell that you are in the process of doing the same. Despite all the struggles that befell you, you remembered that you are a human being capable of many things....and since we as humans ARE capable, then why NOT take advantage of that ability?

Overall, i do hope that all is going amazingly well on your end. The more i look back onto the website, the more stupid i feel because it also reminds me of how desperate i was with certain things XDDD Its...kind of embarrassing; no doubt about that. Reflecting as a 25 year old can be quite empowering though, since this version of me has moved past the nonsensical person that i once was. Guess you could say i was once a child who had the whole world in his room, yet not realizing that there was one right outside his doorstep the entire time.

Saludos, y Muchas gracias por ser mi amigo!!!!! Guess if you ever want to communicate again, you can write to me on my profile haha. A part of me is genuinely curious as to how you're holding up.

Hey!  I know you went to DA and all, but I wanted to say "hi" since I haven't been on in forever!  That and WOW, your art has improved so much since I last saw it!  Way to go!

i'm fine glad to hear you are doing good too^^ 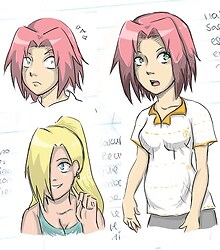