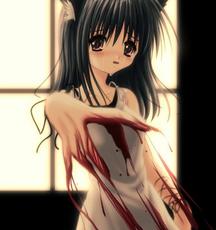 I'm 15, I'm gothish punkish, I love Freddy Krueger & I'd marrie him if I ever got the chance, I think Gerard Butler is a sexy man beast, I love invader Zim, I hate my school with a passion, I love Anime, I'm deeply in love with Johnny Depp & I would just like to say he looks absolutely delicious as Willy Wonka & I don't care what anyone says, seriously I wanted to lick him, LOL. Well I soppose that's all for now but I'll be back! BWHAHAHAHAHAHAHA!..... Ahem sorry about that.

Hi it's me again. Now for my profile update- I now am completely obsessed with My Chemical Romance, I'm madly inlove with Gerard Way, Mikey Way, and Frankie Iero. I'm not going to marry Freddy Krueger(he's too old for me) I'm still in love with Johnny Depp but I love Gerard, Mikey, and Frankie much more. I now work at this evil place called Highschool, they torture me really they do not physically but with their evil work of paralyzed monkeys!! I'm sorry if I confused anyone right there. I still watch Invader Zim because it's best show that was ever made, I don't really watch anime anymore but I still draw it. I now watch this HBO show called ROME, it's very strande and shows too many naked people in it but I still like it(not because of the nakedness),truthfully I don't really watch that much TV anymore and if I am watching TV I'm either watching Invader Zim or ROME or something about My Chemical Romance. So..... well... I can't really think of what else to write..... so..... well..... Yea Bye!

Hello my fans who actually took the time to look at my profile. Yes I've decided to write to you once more. Okay some people have asked if I do requests and truthfully I do sometimes but I've been very busy lately with school, soo you can tell me what you want me to draw but I'm sorry if I can't get to it but like I said... school. Okay now if the request has anything to do with yoai or yuri I most likly won't draw it. Don't get me wrong I'm not against gay people or anything as a matter o fact I love gay people, I just don't like to draw them. Okay anyway I've been quite upset lately cause last sunday was the last episode of ROME soooo now it's all over, my life is back to the little boring thing that it used to be. Lol. Kay bye I'll write again..... maybe!

Hey I'm back. Yes! Yes! Quiver in fear. Lol! Just kiddin', no need to fear me. I have some good news.... well atleast I think it's good news. I JUST TURNED 15 A LAST WEEK!!! Lol. Just thought you should know. Hhmm! You know I've been finding myself becoming obsessed with Inyasha and Yu-gi-oh again. So soon I may be adding some pictures of Inuyasha and Yu-gi-oh. Well I can't really think of anything else to write. Sooooooo until next time!

You have to put your words between the codings to make them colored. Another thing, I'll be honest w/you. I HATE Star Wars. Cant stand it...uh-uh. I really did like the way your char looked, though.

I've just submitted your request, sorry it took so long. I hope it will be up soon!! *hug*

thx for ur comments there cool

ill put some up when i find the installation disk???
but i dont know wat one it is *sniffles*
cya

The piercings are messed up because they were too small and short.
Go to page: