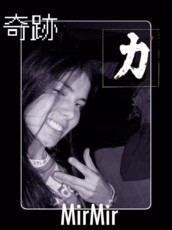 ~~~Now taking "LINE ART" requests. Email me the character what anime/cartoon series it's from, and if you would like it in pencil or Sakura marker. Please don't keep on emailing me and asking when your picture will be done. I'll get it done when I get it done! DOMO ARIGATO!!!

Hello there! My name is Miranda but everyone calls me Mir or Mir Mir. I have an 2006 Acura RSX. I love it! They stopped making them and I got the last vivid blue (NON TYPE-S) in the US! It's sweet because you don't see any of them cruising around at all! I also have an 2008 Dodge Nitro. I aIso love to draw in my spare time. I read mangas, and watch Anime on T.V. The American Anime is such a rip off of the Real Japanese Anime. They edit out so much of the American Anime because they think that it would be better if the younger kids didn't see all the swords and violence, and even to hear some *quote, quote un quote* bad language that it would originally have. I say who cares! It's not like they aren't going to hear it somewhere anyways. Ya know? I say put the good ORIGINAL anime on at night when all the kiddies are suppose to be in bed so the big kids can watch the really good stuff. Or hell they could rate it PG 13. That would help. Even though a lot of kids under the age of 10 watch PG13 movies with their parents. So what's the difference?! WOOOOOOOOOOO...... Ok anyways back to my BIO!!!

If ya like me to draw you a picture just ask me here or email me at the above email address I have listed up top and also beneath. Just say what you want the picture of and all that good stuff. Oh and if you couldn't of already tell, But I can't color worth anything so I can either shade it for you, or perment marker it or just draw it out and let you take it from there. So just let me know. AIGHT? Alright.

--IF YOU WANT ME TO DRAW YOU A PICTURE THEN BE PRECISE ON EXACTLY WHAT/WHO YOU WANT IN THE PIC AND WHAT THEY ARE DOING. IF YOU ONLY SAY A CHARACTER THEN YOU WILL GET JUST THAT CHARACTER. WHAT EVER WAY I CHOSE TO DRAW THEM. NOT TO BE MEAN OR ANYTHING IT'S JUST THAT I DREW A PIC FOR SOMEONE BE4 AND THEY WERE MAD BC I ONLY DREW THE CHARACTER. I DIDN'T DRAW HIM DOING ANYTHING. SO YEAH. JUST TELL ME EVERYTHING THAT YOU WANT IN THE PIC. ***NO PORNO PICS!! well it depends on who's in it ;)*** ANY MORE QUESTIONS THEN JUST ASK!!!--

Hey want to join my contest? Read my blog for more details on it. Hope you join!!!

Your avatar made me think you was a guy. @_@

Your pics are awesome. I fav you. More EyeShield pics plz.

Oh ok! I'll check out your other stuff to than! ^^ 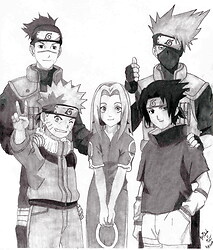