PLEASE READ!!!
If you cannot bother to put a constructive or valid criticism on my artwork, don't bother to post anything. It grates me when somebody has to flame something without giving a reason. It's disrespectful and obviously very juvenile. You know---the kind of thing a little kid would tend to do, so don't sink to that kind of level of intelligence. Please be constructive! THANK YOU!

A few Animes--Love Hell Girl, enjoyed Gundam Seed Destiny,
Marmalade Boy's a guilty pleasure, Scrapped Princess is a
new fave, Fantastic Children is a simply done yet beautiful
work, and Mai Hime has one of my favorite secondary
couplings [AkiraxTakumi for the record], and like
MB---Gravitation is another guilty pleasure, Tsubasa
Chronicles is sweet [Fai is mmm... ;) ], recently have become obsessed with Fruits Basket (and Kyo Sohma XP) (anime and acquiring the manga), Full Metal Alchemist, Monster, amongst many others.

dislikes: trashy romance novels (I am so not a romantic)

general--
love/collect: Pullip, TV collectibles/toys from fave shows,
cats, fairies, Lion King, unicorns...the list goes on
Drawing is a passion, and I'm starting to get into the
writing thing, fanfics being my main focus at this time.
Big want---find paradise and escape the snow for good.----->Has been achieved :P California---I'm HOME!

People who can only try to make people feel bad about
themselves. The only thing they accomplish is hurting
themselves. In terms, if you can't say something not half
assed, then don't be a fool by saying it instead.

-Animal abuse is a crime against humanity. It starts
there, and it works its way up to people.
-total apathy over empathy.
-Those that cannot understand the basics of the old proverb
Do Unto other as you would do unto yourself (Don't
do something to someone or something that you wouldn't do
to yourself)
The media/government/celebrity circus. Ugh >:(
That's me ;)
Crazy quote of mine---
This is a test—and only a test. Anyone who takes this too seriously should be shot.

----Not literally though. Just never literally, of
course---right? :P

"Those who tend to frown throughout their life usually
never chance upon true happiness, but instead wallow where
the darkness ensues."

"To heal my heart or that of another, I take on a task
of providing an artwork to alleviate the pain of what it
was that was lost, from a memory of a lost pet, to the
tragedies in the of the world today. A touch of artistic
flair lightens the events of sorrow, those of the world as
a whole---and those of a more individual level."

cool stuff! keep it up! 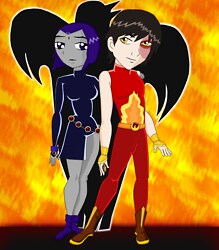