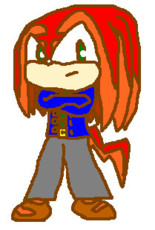 Magma The Echidna
A 17 year old Male Echidna from the Pachomanic clan who was accidently saved by Perfect Chaos' destruction of the race because of being trapped in a Chaos emerald causing him to lose his memory as well while he was trapped in the emerald another being was trapped as well known as Iblis,because he and Iblis were in the same emerald Magma gained the power to control some forms of fire,now Magma is freed and ready for action as his new friends teach him how to fight for justice and freedom.


Shade The Hedgebat
A fifteen year old Hedgebat girl who could be thought of as one of the many prototypes for Shadow,Created by Dr.Gerald Robotnik and Black Doom she was made as more of a plaything and after they were done testing her they planned on feeding her to Shadow the Biohazard but because of G.U.N. landing on A.R.K. her life was seemingly spared as G.U.N. placed her in suspended animation she was kept a complete secret until her release fifty-three years later when Shadow was told by Doom's Eye that a Chaos emerald was on Prison Island Shadow accidently opened her pod but without knowing what he did he left before she was released fully after remembering her last moments on A.R.K. Shade became completely confused and utterly helpless until an Echidna came by named Magma,Magma and Shade became quick friends and became a powerful team,though Shade has been through several tragedies in her life she has the concept that if she becomes to serious she wouldn't be able feel as free so she stays foot loose and fancy free almost 24/7 but at very rare times she can become fulfilled with pure anger and rage.

A 10 year old Tonooki boy who spent most his life helping Big find fishing spots,playing Nintendo Published games,and researching the A.R.K. incident but when Froggy went missing and Big left to find him Tail was left alone to study the A.R.K. incident when he ran into and Echidna named Magma it didn't take long till they became quick best friends,as time went on it was revealed that Tail himself was one of Professor Gerald Robotniks first living creatures and the second prototype ever for Shadow but after the third life form was created Tail was placed in suspended animation and released fourty-six years later when the part of A.R.K. he was in broke from a meteor strike making him crash to earth where Big the cat found him

A 16 year old Echidna girl from the Pachamanic clan who,like Magma was trapped in an emerald and escaped Perfect Chaos's destruction and was released when Shadow first used Chaos Control on earth but Shadow didn't notice her,She was later found by her older brother Magma as time went on Kokoalikaia has proven time and time again that just cause she's an Echidna it doesn't mean she is stronger then the rest,but her quick wits prove useful as she is almost as smart as Tails and Eggman.

A Bone creature created by Proffesor Gerald Robotnik from fossilized remains of the first creature on Mobious his orginal name was Adam but since his memory was erased the Professor traded him to Black Doom for DNA to create Shadow while under Black Doom's care Adam was renamed Deathwatch and trained as a dark soldier he to was given DNA from Black Doom making him the ultimate life aswell but in order to unlock his true power he must get the Master Emerald under his control that was when he met his enemies Knuckles,Sonic,Tails,Magma,Kokoalikaia,Shade,and Tail.
now he still plots to take that emerald from under Knuckles' nose but he also desires to destroy the rest of them specificaly Shade.

A knight in shining red blood stained armor who swear on her life that Sonic the Hedgehog will die by her hands and her hands only she despises anyone who gets in her way or anyone who trys to attack Sonic for she vowed on her life that"The Hedgehog that destroyed my creator must die" she made a portal that tranfered her from Camelot to Mobious and now she will stop at nothing to kill Sonic,but she has met several new enemies and rivals who always defeat her in some way shape or form no one is quiet sure who or what lies under that armor.