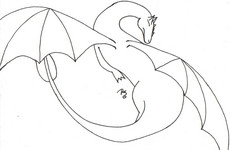 Screw it this is the place I'm sticking all of it because well...that way I can see how far it's all come...MWAHAHAHAHA

Hey rinibabe, sorry if it took long get back to you. Um...if you don't mind, can you draw a LupinxFujiko fanart ( I have an unhealthy obsession with this couple ^^)? It doesn't matter what it's rated.

If you don't want to draw LuxFu, then you can draw the cynder and rinial couple, I thought that couple was very cute. I really that fanart you have of them being cute and naughty.

I'm hoping this keeps you from being evil. Thank you so much. Your so awsome! I promise I'll draw you something in return as soon as I get done with my project.

Hello rinibabe, thank you so much for the comments! Glad you like my LupinxFujiko fanart. You have pretty sweet gallery yourself. Your a very good artist. I have to think about a request or art trade. I don't really want to do requests for the time being, just stressed out to the max right now. Plus, I really, really want to start my LupinxFujiko comic very soon. Something I've been wanting to do for a long time. But, if your willing to draw something for me and comment on my stuff, I'll do the same. Um...I don't sound like a jerk do I? Sorry if I do.

Yay! o: A request from such a talented artist...
Anyway. I don't mind waiting at all ^_^ The request is here:
http://forum.fanart-central.net//index.php?showtopic=15868
Thanks so much!

i like your pictures, you're quite tallented. please take a few and sheck out my stuff. keep it up.

finally
the frist ray pic is up!!!
I hope you like it rinibabe!

One of the rai are up. my computer is screw right now sorry. Ill have to put it up later.
thank you!

Well I always love to give a few pointers about the comment thing. Yeah.. the adult stuff gets a mass of views, and no comments. And yeah... obviously you're not getting enough attention. I've looked through a fair amount of your pics, that have had no comments.

Sad, yes. But this site is pretty damn big. And if you want attention... you kinda have to ask for it. See I've given just about 1000 comments. And in return, I've probly received about 800. And a good 80% of my gallery hear is adult.

But there is such a huge list of reasons why people look and don't comment. A large amount of people that are on this site are young... so if they see an adult pic... they're not going to comment.

The views can be slightly decieving. You can actually add to the view counter, by viewing your own work. And some people will view the same pic more than once. Meaning if you have 300 views on something... that may mean only 200 different people have seen your pic.

It's tough, and it's bogus... but it's the nature of the beast. If you want attention... you have to give attention. And there are even draw backs to that. I'll comment on like 5 pics by someone (and I tend to give good comments) and I won't get anything back. It's tough. And I know I'm guilty of it too. I have people that comment on my stuff all the time, and I've probly only given them 5 comments or so.

Phew... sorry this is sooo long. But from your profile you seemed quite discouraged about the whole thing. Ok I gotta go... good luck, and don't get too down and about from this site.
Go to page: 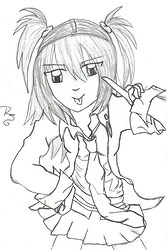