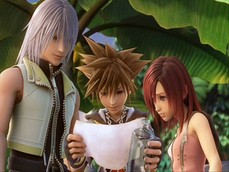 Yo Snake, where are yuh?
Your buddy Snake is in a rut. She is no longer the random, maniacal, lame homourist she once was, but more of a...well, I don't know what the fork I am now, but it ain't what it was before. Therefore, I probably won't be updating much, if not, AT ALL, on FAC. ...Scratch that. I might update. Once in a while.

Why Snake? Whhhhhy?
One, I hardly play video games anymore.
Two, I still have yet to play Kingdom Hearts 2, which Kingdom Hearts is what made me who I was that day, or something.
Three, FAC has changed. Now I may not have been here as long as most people, but eh. I miss the blue. o.o And It takes me a load of time to actually load a page too. Not to mention uploading artwork, which takes even more time to load. Basically, I don't like change. Which makes me a really complicated person, dog sarnit. But the love is still there.

Love? Wha?
You know. It's like we've been dating for a while, but after 2-odd years of intimacy, I got bored of you and persued a different route...except you actually found out I was cheating on you with Deviantart. o.o And we're still going at it, with red hot, firey picture uploading between the sheets. ...Okay, now that was creepy. xD

So yeah. Sorry folks. If I ever get my funny back, I'll come back to you. If FAC becomes blue and less laggy for me, I'll surely be back. But until then, ya'll gotta wait craploads of time for an update. That probably won't even be funny.

But if you like Snake, not only for her humor, but for her artistic (-Laughs-), and crude original humor, go here. (http://bootleg.deviantart.com)

Now back to your regular programming.

Name: j.y (aka Snake, n00dle, or bootleg)
DOB: Feb 13th, 1989
Age: Do the math.
Sex: Atleast the FAC has the decency to use "gender". xD
Anime preference: Comedy, ecchi, shoujo-ai, and to a lesser extent, shounen-ai.
Mu-zac: Right now, I have an insane infatuation with Benny Benassi.

Requests: No.
Why: Lazy.
Okay: Yeah.
*If you ask me to draw a picture of an actual, non-original created character, I might draw for you, but odds are I'm still too lazy. Other than that, no.

Riku the Paopu Fruit and His Star Fruit Buddies was removed due to violation of FAC Rules and Policies and Stuff. So go here and stare at my boredom and photogramaphy. o_o (http://i6.photobucket.com/albums/y208/n00dle-bowl/RikuStarfishResize.jpg)

*I hate chain letters. Particulary the last one that was posted on my profile. The one regarding the "skinned dead girl". It has been removed, and I pray that it will NEVER be posted again. So, don't post chain letters on my profile, PLEASE.

The Adventures of Generic Hero Guy
19654

Snake-Eyes, I know F.A.C. is pretty much dead right now...

but, you could revive it;
you know that right? (;

I miss you. SO BAD I DO. I MISS YOU SOOO MUCH. SO FREAKIN MUCH. I don't care if you've lost your humor somehow. Just the memory of who you were, the hilarious artist who drew many wonderful things for her viewers, makes me want to make a desperate profile comment like this. xD WHEW.

Come back if you have time! ;<

You have VERY good artwork and funny comics!! ^.^

ur art is so cool