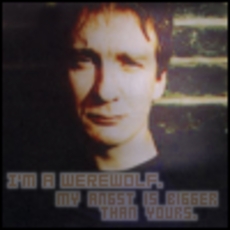 fav books:
The Hobbit
The Lord of the Rings
The Wheel of Time(1-5)
Dracula
Anthem
Everworld
Um,i cant remember them all right now.... Some fan i am, right? Hehe.

I'll add some more later.
I'm Mrs.LupinBlackTookBrandybuck! Is'nt it freaky how we fall for book characters? It's pretty sad.... I dont care!!!
I also write stories on fictionpress.com and fanfiction.com. Look for Quirinus-Romulus [/font]on ff.net, and Tragically Pleasant on fp.net.

"Do you know how hard it is to fake your own death? Only one man has pulled it off: Elvis."--Mulder

The 'Son': "Don't you want to live forever?"
Mulder: "Not if drawstring pants come back in style."

Mulder: "I tied up an air phone for three hours. I don't speak Japanese, but I think some businessman told me to stick a piece of sushi where the sun don't shine."

Mulder: "One more anal-probing gyro-pyro levitating ectoplasm alien anti-matter story and I'm going to take out my gun and shoot somebody."

Scully: Have you ever had any dealings with a cow?
Mulder: Agent Scully, WHAT are you implying?

Scully: According to the briefing, the prisoners escaped while hiding in a laundry cart.
Mulder: I don't think the guards have been watching enough prison movies.

Mulder: I was told once that the best way to regenerate body heat was to crawl naked into a sleeping bag with someone else who is already naked.
Scully: Maybe if it starts raining sleeping bags, you might get lucky.

[Mulder and Scully are posing as husband and wife]
Mulder: Wow. Admit it, all you want to do is play house. Woman! Get back in here and make me a sandwich!
[Scully throws a rubber glove at him]
Mulder: Did I not make myself clear?

Mulder: [leaving the room to go under cover] If you don't hear from me by midnight... Feed my fish...

Thank you so much for your wonderful comments on my work. I'm truly flattered! And I'm even more gobsmacked that you added me to your favourite artists! I really appreciate it!

And you know, you're really talented yourself! I'll have to read your fiction too! =D

Yeah, Perrin is my fav above them all. Yeah, I think the new book comes out soon. I'm not sure when, all I know is soon. lol... I've read up to book five, and gave up there. I just got so annoyed by the bad guys and the women (the author makes women look horrible! In my opninion) and Perrin didn't come out at all in book 5. *looks angry* I want my Perrin! lol. I might take the books up again, but I'm not too sure....

i love perrin too! and mat and rand. i've only read #1, the eye of the world. (they is so long!) i don't mind the girls that much, nynaeve and moraine and egwene are the only ones i have met, though. doesn't the 13th or something come out next month?

Hi Ocelot and Gerudowolf!
Are you kidding me? I'm a HUGE LotR fan! I adore those books/movies! Merry and Pippin are my favs also.^_^ I loved them when I read the books, and when they were in the movies. Dom's and Billy's hottness add to my love for them. *drool* It's always nice to find ohter Wheel of Time and LotR fans out there. Perrin, Matt, and Rand are my favs for Wheel of Time. The girls get annoying, though....

youre a LotR fan? yay! *glomps you*^^
I'm a huuuuge fan of Merry and Pippin :P
I got lots of LotR pics in my gallery.
check it out ^_~

i love the wheel of time too!
Go to page: