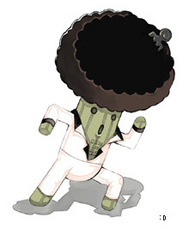 My name is Aaron, I'm a major One Piece fan but like to view other series as well.

I can only write, my drawing skills are among the same as a walrus (read: not good)

Basically, to get along with me, don't be a dick. A majority of my OP stuff will most likely be Robin/Zoro, so you're gonna have to deal with that. If you don't support it *shakes fist*, that's your opinion. We all have them, that doesn't mean you can force them in other's faces.

I support yuri and while I'm not a fan of yaoi, I will not be offended by it as long as you don't shove it in my face.

I am also in the process of an original series based in the universe of Rockman.EXE (aka Megaman Battle Network/NT Warrior) called Plug-In, it is my main work and I hope to share it with you soon.

I am also in the preplanning stages for a completely original work called "Wildgirl Chew". It's about a girl raised by the jungle fighting to save her homeland.

My LJ is http://ninjakefka.livejournal.com/. It is the home for my insanity.

One last thing, as an OP fan, I reserve the right to punch any Naruto fan who complains about the Naruto dub.