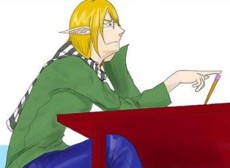 I HAVE NOW OFFICIALLY MOVED TO dA AND TEGAKIE!

COME AN' CHECK ME OUT!


Idioms of Cloud:
In the clouds...in a condition of absent-mindedness; lost in reverie; impractical
On a cloud... exceedingly happy; in high spirits


I'm back with a new and updated profile! I've been needing a new one for a while. It's kind of like Spring Cleaning for me on this cite (even though it's in the middle of winter).

Okay, so let's hit the basics first. I think of myself as an artist (hah hah) and mostly do fanart. I do have my LOVELY origional character, Zippy (you can search my art for him) who has also gotten a lovely update on his look recently (no more tail and cat ears). I also write... but I'm probably not going to be posting much of my writing on this cite. Sorry.

I DID get a tablet, so my art will hopefully improve over time once I get the hang of using it. Awesome.

Cloud (that's me)...
...never gets enough sleep
...has a bff named idk Render? (Mess with her, mess with me)
...loves eating salad with way too many croutons
...listens to music with trumpets and vibraslaps in it
...plays the piano (if playing is what you want to call it)
...owns a PS3
...totally ships GuyKakashi
...is a Naruto fan and proud of it
...still doesn't get enough sleep
...bobs whenever "I'm Yours" comes on the radio
...sees yaoi in ever-y-thing
...has one dry/dirty/corney sense of humor
...can't spell worth a crap
...JOOOYGASM!
...will forever love the KyourakuUkitake relationship
...still has a tin full of Yu-Gi-Oh! cards
...wants SO HARD to sell a book
...believes in you who believes in me
...brought sexy back
...dislikes socks
...likes pairing stripes, polka-dots, and plaid together in an outfit
...REALLY wants a plaid baret
...will do art request/trades if you ask nicely
...currently has very cold hands
...has NOT read Twilight and doesn't plan to
...reFUSES to make a 'charry' to anything
...hates people who create a sob story of their life to make themselves feel better
...believes that the only way to have a life is to make one for yourself. Other people aren't going to make one for you, y'know. Life'd be to easy that way
...is hardly ever hungry, but could always eat
...really likes Diet Coke
...and french fries
...hates dumb movies (you know the kind)
...cried while reading the Dark Tower
...forgets where it set it's glasses down at
...talks to itself, and more often than not responds
...recites the lines from Advent Children while watching it
...LOVES marshmallows
...sees Wesker and s.h.i.t.s bricks
...HATES the cencorship on this cite (why can we swear in pictures and not in comments/profiles? Beats me)
...encourages all to watch Tengen Toppa Gurren Lagann
...no seriously, watch it
...COCKADOODLEDO
...grinned because it just said "c.o.c.k"


Excuse me people of Fanart-Central.
Testicles.
That is all.

Me likey your worky very much.
I wish I had photoshop, or gimp, or whatever it is you used!
:I
Keep up the good work.

Well, thank you a lot! However, I've pretty much abandoned this site and taken off to both DeviantArt and Tegaki E.

If you followed me to those sites, I would be much obliged!

I will certainly give that a go. =)

I'm so sorry I didn't answer your message sooner. =( I can't remember getting an email about it...and I'm really slack about checking my profile. ^^'

Sure I take requests. I've got a couple I need to finish at the mo' so there might be a bit of a wait, but I'm always happy to take new ones.

Sorry again about my late reply. =(

no problemo, you draw wonderfully X3

awwh, thanks a lot :D

welcome ur gallery is really cool

And why am I not watching you! O_O You have such a lovely gallery and your art is very nice!

pokes u in the eye 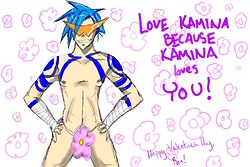