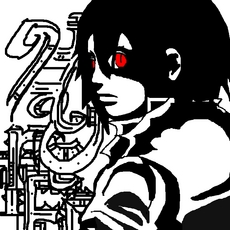 hey all, i just thot id update some stuff since im at DA drawing and commenting, going there, i have learned so much more about drawing ppl, and its awesome. i've changed quite a bit. but still the meanie!!^____^ yay. its goin swell for mah. maybe i should erase this??....i should Im thinkan about it... :T

likes:) Cowboy Bebop, Yu-Yu-Hakuhu, music of all sorts, Naruto, anything that has to do with Legend of Zelda, GUILTY GEAR of all the series, One piece, Yu-Gi-Oh!, Marvel vs Capcom2(Sadly theres not that many people out there that likes thi game). Jet Li,(Hes so tight with the movie 'Unleashed',I like Jim Carey,(Hes a funny guy, gotta love him.:))I like Chris Tucker,(Hella tight dude, hes funny)Jackie Chan,(yup, hes cool) I like alot of the anime shows, and cartoons.(CARTOONS ARE MY frackIN LIFE BABY!!) LOVES VIDEO GAMES!! Yes I do! Loves my friends! Yeah! I'll put more in when more comes to me.:)

People who cant take critisism and go and make themselves look so damn stupid.(I laugh my @$$ off at how pathetic some people are on here.)

Some People who are nerdy at times.

People who cant take a hint.

I hate suckups, so dont suck up to me, be truthful to me.

I HATE BACKSTABBERS!! (frackIN HATE THEM) If your a frackin backstabber and your reading this now, GET THE frack OUT OF MY PROFILE dogES, If your not, then feel free to keep on reading.

I do hate losing to people in favorite games,(I throw a fit and throw stuff and hit crap around cause I get so mad) heheheh. My friends think its hilarious.

I also hate that stupid @$$ show Inuyasha, its all so damn stupid with the Queen of doges Kagome. Inuyasha is cool with me tho. I hate that loser perverted bastard of guy that hangs around the group, if he had touched me, I would have beaten him silly with a bat. I dont like those other losers as well. Kikoyo, if she ever came out of my tv, Id stab her to death, Id do the same with Kagome.

I hate Paris Hilton,skinny @$$ whore, I hate Angelina Julie, boyfriend stealer dog, I hate J-Lo, for lots and lots of reasons. I hate R Kelly, he is a rapist, bastard.....,I hate Pamela Anderson, shes a stupid dog who decided to sue kentucky fry chicken because they 'treat the chickens there wrong' Come on man, its a frackin chicken restarant.I'll put more in when I get more ideas.

I hate prissy movies, especially ones with Hillary Duff(Hillirious dumbass), she doesnt know how stupid she is. hehehe

OHHHH, I SO HATE Slav3ry Rul3z! I HATE YOU SO MUCH SLAV! AND YOU MADE IT TO MY HATE LIST dog! YEAH THATS RIGHT YOU RACIST MOTHERfrackER! YOU MADE IT TO MY LIST YOU LOSER! If you guys dont understand why, go check his profile and see for yourselves. :(

Thats all I could come up with for now, I'll put more in later.

Zappa(:My sexy @$$ australian, nobody knows how special he is to me! HEs my number one sexy guys on the list, hes so sweet and lovable, the poor thing though.:)

Caim("From Drakengard! Nobody really likes to play this game. Tho, he is badass motherfracker. I would die for this blood thirsty killing machine! HES So awesome! YEAH!:)

Kurama(: Such a sweet mama's boy, so cute, so gentle, I would be so scared if he ever lost his temper.:)

Hiei(: Such an asshole, and dark, little shrimpy sexy demon. So cute. He has a bad atitude.:)

Sasuke(: Yeah, stuck up, asshole, cute, what else is there to say?:)

Sol Badguy(: The sexiest man I've ever seen, seriously, he has the nicest mucsles and face I've ever seen on manga or video games. Probably the king of sexiest men. Also has a badass atitude, but i see a flaw in him,he has no @$$,:(and they had him show that he cared. Damn.:)

Link(: Legend of Zelda!Yeah! Link rules and does not belong to any women! Link has no idea what love is anyway, he is not frackin gay, he likes women, if he ever likes a woman, the most likely woman he'll like is Zelda.:L

Hayato(: He is from Marvel vs Capcom 2! I totally fell in luv with this guy! Hes cute! Too bad theres no fanfiction about him...:>

uhhh.....what the frack r u talking about you fracktard? I love being female cause well....its awesome. and its funny how you made yourself look friggin retarted just now. hahahaha. later.

1st of all I do not really think she's not that kind of girl 2nd why are you calling youself retarted?

are you shooting me? i was callin you retarted, i was just checkin out the reply thing to see if it works. but anyways, you believe what you want, that girl is a stupid dog that cant draw for shoot. peroid. but whatever. you need to stay out of ppl's businesses that dont even concern you. :(

lol. thanx *blushing* ummmmm, nobody has really bowed to me bfor. that is kinda new.......

hey, your the shoot. come on now.

Okay...why would you think I've been eating a horse's buthole I don't comment at her all the time besides she's my friend(not mad OO)
o

i seem to repeated myself accidently.
Go to page: