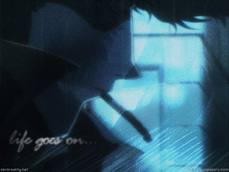 "The supposedly broken music box begins to move, and a nostalgic tune fills the air then I happen to wake up from the dream, and there is no such thing as a music box...yet there is a small music box nestled in my hand, and I awake from the dream again. As if I was peeling an onion, it's a dream no matter how far I go. I can never return to reality...such a nightmare this is...."

I've just gotten back into drawing and making all kinds of various things...though I'm not as good as my superiors I've started to try. ^^

It is with great happiness that I can say....

so....did you see any of my pics that you liked?

hey I saw u commented on my profile and yeah your drawings r really good I was talkin to ShadowGuarderForever about
how to get my art on the computer(i still havent figured it out yet) but i'm open to any requests and i'll post em as soon as i figure out how to get em on the computer.
^_^

your welcome...hey...you wanna be my friend?

your welcome...hey...you wanna be my friend?

Oh no K-chan has unleashed her poking'ness upon you!
Go to page: