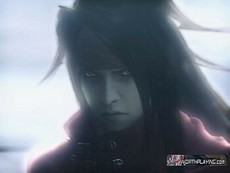 I’m a 16 year old Christian girl who is a Final Fantasy and Kingdom Hearts freak! I’m about as addicted with Final Fantasy VII: Dirge of Cerberus as you can get! They do say that admittance is the first step toward recovery, but why would anyone want to recover? xD
Apart from Square Enix games, I enjoy movies, music, video games (DIRGE OF CERBERUS!), anime, chatting, and role-playing… which I probably should have listed first… ^^;;... oh well. I love making new friends and chatting with people. I’m a very chatty person; so naturally, I would enjoy chatting with almost anyone!

I'm currently in the middle of writing a FF7 fanfic trilogy that will be uploaded to Fanfiction.net, so if you feel like reading it, check out my profile for updates. My account name is .Halo.Ravenwing. (Dot at the beginning and the end).

Note: People I put on my "favorite artists" list get on there because of their excellence of drawing skill. This does not mean that I like every single one of those pictures. They get on there because they're great at drawing. Do not take my Favorite Artists list as a reflection on my own character. Thank you!
[/color]

Wow, I thought that nobody apart from me liked Dirge of Cerberus!! O: Although I have to say that I prefer Nero to Vincent...
^_~

Hay I was wondering if u wanted to be friends?

Somebody else has good sense on this site. ^^ He's just about my favorite character EVER from ANY video game or anime series. xD No, I'm not obsessed, why do you ask?

I don't even know you. Why would I want to be friends with you?

How can we be friends anyway?

Will do Neko! They miss you. They know that you put that dummy in your straight jacket...
Go to page: