hi, i'm tj. you guys might previously know me as alluneedislove. my account put a virus in my computer so unfortunately i had to make an entire another account. i'm very upset about it but this is what has to happen.

i live in akron ohio and i love it. or atleast i used to live there. now i live in norton. i miss akron. downtown akron. where there were so many art galleries and record stores. i miss it so much. but most importantly i miss my best friend al. i don't hardly ever get to talk to her unless i get to talk to her on the phone. i have good friends here in norton but i miss al. i couln't leave norton though. that'd mean i have to leave my boyfriend. yes i have a boyfriend and i'm madly in love with him. he supports me and comforts me when i need it. i love movies and music too. as far as movies goes, i like funny movies and as far as music goes, well, i like all kinds of music. there really isn't anything i don't like.

my favorite band is the black keys. they're from akron and they're amazing. i also like music in band that we play. i play a saxophone and i love it. i can play alto sax, soprano sax, and tenor sax. right now though i'm playing a bari sax.

okay guys, i just want you to know that i'm open to drawing all kinds of stuff. yes, i draw somethings with nudity and sexual content in it. if you have a problem with that, well then don't look at my gallery. it's that simple. people that flame other work, well, i really don't have time for you guys. i'm not going to be hurt by your silly remarks about my art. if you have a question about it like you don't understand it, i'm not going to take offense to that. so don't be afraid to ask. criticism is okay but flaming my art won't get you anywhere.

REQUESTS:
i do take requests. sometimes i don't really know what i want to draw so if you have any requests just say something. don't be afraid. i find contests fun too so i will create some and participate in some gladly. you just have to let me know. just like i will let you know when i'm holding a contest. if you ask me to draw something, i will draw it. the only thing i will NOT draw is racism. that's it. you can ask me to draw anything else. i'll do it.

FRIENDS VS FANS:
look guys just because you're in my favorite authors list doesn't make you my friend. you have to ask. asking would be a totally different story and even if we do become on-line friends, i still won't tell you any personal info because i don't know you in person. it'd be different if i knew you but i don't so sorry you stalkers. you're not getting anything from me.

Dude, if u ever get a chance to check ur mail I sent u a pic of Marrin. At least now you'll have some clue of what he looks like even if the pic really isn't that great.

what email did u send it to? i have about 500 email accounts

I don't wanna put ur business out here on FAC dude.

why i tell ppl my email all the time. they aren't going to find me on fac but if u don't want to that's cool. i'll try to find it.

Why don't u just call me? It'd be easier that way. I'd call u but I never know when ur home anymore and last time I called u weren't home.

no i was home. i was grounded. sorry my parents are assholes. i can't call u for about 4 months...i did something really bad..so i'm not even really supposed to be on the internet. my parents can kiss my @$$ though. i've had enough. that's why i dented my mom's brand new 1500 dollar refrigerator.

Who was cute? Sorry to hear about that. Grounded huh? That really sux. 4 months? Dude, that sux ballistic junk-food.

marrin was really cute! those eyes and the blush..so cute X3

Why thank u. I tried to make him look as cute as possible. He didn't quite turn out the way I wanted him to, but that's what practice is for right?

way to be positive

Dude, you're not supposed to sprain ur elbow. Don't u know nothin'?! No but seriously I'm sorry to hear that bro.

i actually sprained my elbow and my wrist. i fell down the stairs @ skool. it rly hurts

Hi. Not much happenin' here and urself?

Hi! Thanx for the comment and the fave! And don't feel bad because when I was little I felt the same way!

Thank you for the Fave on Over the Rainbow 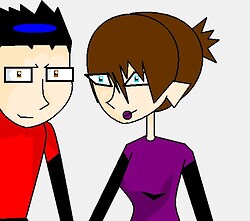 Me and Jace (my huggles)