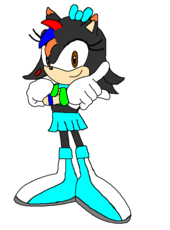 
Name: Ashley the hedgehog
Age: 15 1/2
Birthday: December 5th
Nickname: Ash, Karmella (evil side of me), & and Ashley
Likes: Rice, Meldok, Shadow, Tomb Raider, Watermelon anything (even slushies XD), being friends, helping people, and speed
Dislikes: her evil Side Karmella, Eggman, People calling me girly girl, and people touching me at private places.
Boyfriend/Husband: Meldok
Friends: everyone except the destruction gang and eggman
Favorite colors: Turqoise, Black, Blue, Red, and white
Powers: is a half vampire half werehog, has a evil side that comes out every wednesday night, she's another half of me named Karmella, Dark Bloody Blast, Chaos warp, Dark Bloody Lightning, speedy like the other hedgehogs(Sonic and Shadow), and lots and lots of other powers I can't even list XD
Eye Color: Brown (then turns blood red in the pupils and brown on the outside of the pupils)
Fur Color: Black, Blue, Red, and Orange (stays the same from my evil form but grows longer tail)
Theme Song: The Other Side (hannah montana)
Favorate Songs: All Hail SHadow Crush 40, His World Crush 40, See You again by Miley Cyrus, and GNO Girls Night out by Miley Cyrus.


okay if anyone ask me anything I am at Deviantart.com alot & my user there is Shadowlover245 kay see the other pictures there too. :D

You must! Lol
It's cool with me if you call me that.

if anyone asks I am on deviantart.com my user on there is Shadowlover245 see all the pictures & comment on it if your one of deviantart on there too okay.

The pic of Shadow is done too! Here is the link: http://www.fanart-central.net/pic-593915.html

I'm goign to have to split your request into two parts: A pic of Zoey and a pic of Shadow. Is that okay?

The reason is that my computer is acting wonky and It isn't letting me combine the pics.

Actually, my requests are full right now. And when I finish them, I will only be taking one rquest and one art trade per month. However, I do currently have an art trade spot open. Sorry for the inconvinience. 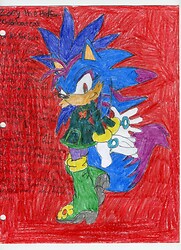