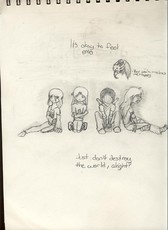 Ta da! You've managed to fine my small dark profile page, that's not necessarily a good thing...Well, i suppose I should tell you a little about myself, though I warn you, I'm a pretty confusing person.
I'm a huge anime freak. I might as well say that frankly. Although I've only scratched the surface of anime, I adore it. I like InuYasha, Wallflower, Naruto, Fruits Basket, Demon Diary, Fullmetal Alchemist, Bleach, all the Miyazaki films I've seen (most of the ones out in English),  and, well, about five or six others that my friends have told me about but I haven't gotten to watch/read yet.
And, of course, Avatar:the last airbender is my number one fangirlly obsession. More specifically, Zuko is my number one fangirlly obsession. Hehe, yeah, I know, I've turned into a bloody, squeely, violent (even more so than usual), hyperventalating fangirl. And yeah, I scared all those within twelve miles of my house when I saw the preview for the 'Zuko Alone' episode.....not to mention the fact that the screams freaked out the chickens, so I kinda think my neighbors thought the chickens and I were being murdered, and I was laughing maniacally for some unknown reason....
So, since I'm sure you're all tired of hearing about that, I'll wrap this up. I draw a lot, but I barely ever post. I should mention, I suppose, that I idolize a rather intersting figure in Romanian history, Vlad the Impaler. Whatever you think about him, you're probably wrong. So look him up, he impaled people, and no, he's not Dracula the vampire, so nyah. And, as Akina would say, leave now or I personally make sure your head is sitting on a pointed stick three miles away from the rest of you.
Just joking. :P *hits Akina before she can protest that she wasn't kidding*

Do you have another chapter comeing soon? I can't wait for it!
Froze8

i really like your stories. they remind me a lot about this movie called Princess Mononoke that i used to watch constantly as a kid. Anyway I like the plot and the characters. I've been checking quite a while for any updates on your stories with zero results. If your having trouble i would like to help in any way. I feel that i should try to help seeing as i Haven't commented on a single one of your stories.

OK, about the clothes: She has dark brown sandals, white fringed shorts, and thick black choker. She also has a pair of black/grey fingerless gloves, each of which have a single red curved triangle pointed toward the hand, going about 1/3 of the way down sewn on them. For a top half, she has a tube top with a design similar to her gloves just in a black on red format. Enough information?

Well, I would prefer if you did the Earthbender, but you can do the Firebender if you want. I don't really have a story for her, but her time is a short while after the first Sosen's comet so she doesn't follow Ozai, if that's what you're asking. Her name is Luki (Loo-kee) and she is fourteen years old. She has black eyes, and tan skin. Her hair is red, with a grey streak on each side of her face. She has this gold headband, shaped almost like a tiara, and it has a garnet stone in the centre. If you need more info, feel free to ask!

Um, you wanted the description for which of my chars? The firebender or the earthbender?

Hi! I love your art and stories...yeah you already knew that. But do you watch Princess Mononoke? Cause there was a guy turning into a demon...and elks...lots of elks...and violence...unnecessary violence...

For writeing "A Demon Of Fire" I want to give you this *hans you frozen special dark choclate that you can only get from Froze8* Enjoy it.
Froze8

You write the best stories I've ever read. *just read the 30th chapter of "A Demond of Fire"*
Froze8
Go to page: 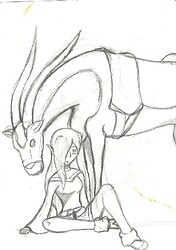