In An Age Of Vampires and Elves
Iradaries
828868

"We'll pay the coin for however much you have left." The man said, as he added the other coins to the case before pushing the lid back on. "Rooting on you two, be nice to see Karina slumming it for a week." He pushed the case aside. The dealer tapped the side of the deck against the table twice before he started to flick out the cards.

"Flattery won't make me go easy on you." Karina laughed, picking up her cards.

"Ah, poker? I think I remember how to play." Lina said with a smile as she met Kenu's gaze.

Holding his right hand over the candle the flames burst up suddenly, curling around his fingers. Garail closed his hand into a fist and the flames died down. Twisting his hand around he unfurled his fingers, a purple wisp hovered an inch above his palm. "I does not matter why, the power is yours." He said, casting his pale eyes down at her. "What is important, is what you choose to do with it. With proper training, with only a breath escaping your breast entire could be cities reduced to ash and bone, seas boiled, and mountains ground to dust." Images flickered in the wisp as he spoke. "But you don't seem the type for wholesale destruction."

"Oh, the pleasure has been mine. Feel free to drop by anytime." Karl said with a wave of his hand. Shal nodded as he picked up his packs.

"Aye." Shal said, "good health, bright coin." He added as he stepped out of the building.

(That's fine, let me know if you need some reminders about anything)(Hm, time to put the ol' thinking cap on)

Brushing her bangs aside with her fingers, her eyes slid across the room. Longer than it was wide, two windows on the left wall, a round table in the center, with three men sitting on the far side. The man in the middle, tall with burnt skin, his eyes cast down as he shuffled the deck of cards. The man to his left reached out and plucked up the nearest coin, he inspected it for a moment before picking the other coins up. "These'll be fine, can always trade'm off to some merchants heading North." He lifted the lid off a worn case and placed the coins in. He counted out six stacks of well used chips and pushed two stacks in front of three empty chairs. "Five white to one brown, two brown to a yellow." He said, as he started to count out other stacks.

"Chips?" the man with the deck said, pushing a stack of coins to his left.

"Easier than converting all the money."

The thin man on the dealer's right chucked. "Good at poker 'eh? Well maybe you'll be able to clean out Karina then." There was the sharp scrape as Karina pulled the chair out with her foot.

"You're just mad I own your favorite shirt, Yev." She said lightly, sitting down. Lina looked up at Kenu, the corners of her lips curling upwards as she took her seat.

"Yeah, yeah." Yev said, pushing his coins to the left.

"That is good to hear." Garail watched Kiara fidget with her dress for a few moments before stepping into the room. "Lord Tyran always treats his guests well." He paused next to her, leaned over her as he picked up the candle. Rolling it between his fingers, he examined the wick. "A child of Hunger is a... rare thing." He said absently, he ran a finger up the candle, a lavender flame springing forth as he passed the wick. "Once you have control of your gift, what is it you hope to do with it?" He raised the flame to his lips and blew, an illusionary flame expanded out before him, curling inwards upon itself before fading away.

Shal folded his clothes carefully, pressing them flat before placing them into his pack. Next was an assortment of dried meats and traveling bread. Not the best tasting but it served as food when everything else had run low. A short carving knife and a tin of whetstones were next, and a worn map was placed on top. He closed the pack and slung it over his shoulder. He picked up several other packs before stepping out of the bedroom into Karl's store.

"Finally heading off?" Karl said, leaning on his counter.

"Ah, guess it'll get quieter around here, was like having too newlyweds for a while." he said. Shal grinned as he leaned against the door frame.

"I do apologize for any noise." He chuckled.

"Ha, you apologize? Never thought the day would come." Karl laughed. "Anyway, you two travel safe, heard from some soldier friends about raiders to the East, along the Hollows."

Shal nodded, "thanks." he said, glancing over his shoulder.

(I say yay!)(So, let's figure out what we want to do with Akade and Ariana)

Whew life's sounding busy for you, don't have an aneurysm, those are bad!

Lord Alister Tyran was his name

I believe the plan was for Ariana to also be pulled into the fold, She had a lesser nobleman who knows Tyran is gathering mages


As for Ash and Shal, I forget most of what was going on with them, I remember that her children were to be exceptional mages

(Ah, that sucks. Must've been nice to tell her so shuddup then)

"Poker." Karina said and Lina took a seat next to Kenu.
"Aye, you can bet coin or any belongings." A thin guard with black hair chimed in.

Grail rapped two knuckles against Kiara's door, three quick hits he repeated twice. He waited only until he heard the tussle of movement, before he turned the door knob and pushed the door open. He passed through the doorway, his pale eyes slowly moving across the room. Lightly furnished, all craftsman pieces Lord Tyran had ordered moved into the room Kiara was given. No mess, no clutter of personal belongings, a faint smile curved the edges of his lips upward.
"I do hope you have rested." He said, his eyes turning towards Kiara.

In hope that you shall someday return from real life, Roleplayer Guild was the site you recommended, right?

(Ah, one of those sorts of people)

Two of the guards at the table glanced over at Lina stepped into the room. One of them chuckled.
"Wha'd you rope some fresh blood in?" One of them asked, turning towards Karina. The woman smiled.
"Yup, hope none of you mind." She replied. A few of the guards grunted but otherwise gave no response.

"Thank you." Lina said with a smile as she started towards the door.

(Some form of poker probably, haven't put much thought into card games of this universe)

With a nod Lina stood up. "Yes let's!" She said with a bright smile.

"I'm sure I can pick it up quickly enough." She said with a light smile.
(Well, she is good a picking out liars, so she should be good at gambling.)

"Well um... I know a few games, but probably not the one they'll be playing." She said.
Go to page: 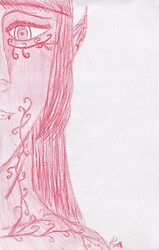 In An Age Of Vampires and Elves