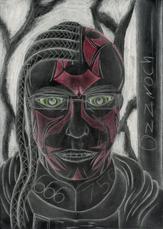 I was a DBZ fan in sixth grade, along with other (kiddy anime), but I never really distinguished it from other cartoons. I now classify anime as another form of TV altogether

my favorite animes are as follows:(not necessarily in this order)
Notice that I will also list my favorite character from each one.

My favorite thing about Wolf's Rain, is that I can recognize every one of the main four characters' voices from somewhere else, ex. Alucard(Hellsing) and Tsume share a voice actor, as do Vash (Trigun) and Kiba.

When you have this ability (which extends beyond just the named anime and voice actors), you are truly an Otaku.

I'm not restricted to anime though. I've actually been trying to aim my works in a more original direction. I still love anime but I'd like to be able to show people other things when they're looking through my works.

ok, I'm done, if you actually read all of that, then good for ya, and if you didn't then it's no big deal, none of it's very relevant.

If you think me talented enough you want to ask a request of me than here is the policy, the subject matter has to be something I like, for one thing. Also,I wont depict something from an anime I'm unfamiliar with, and I wont depicts OCs or Merry-Sue characters with official anime characters. I find that lame and unoriginal. your best bet is to hand me an OC on their own, or a character I'm familiar with doing something or looking original.
This is all assuming however you find me talented enough to ask a request of. one more thing on that note, I will do it on MY time. so if it takes a while, don't dog. unless you've done something for me, in which case your piece takes priority.

I got a new internet service, so i have my own e-mail address. :D

eeeep! *smacks forhead* sorry sorry sorry! Can you give me the description again? And ill draw it as soon as possible... Sorry! :(

hey remeber me??? *looks at the comment below* That's me! Yep I used to be Keema_Elric, but I changed. :D So I just dropped by to say hi!

Hello there! I'm leaving to go on vacation in about an hour so I want to say hello and goodbye! I won't be back for a week, but I'll talk when I do come back.

I'm sorry for asking so many questions.... I just don't understand sometimes....