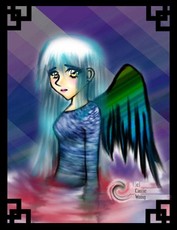 Favorite Movies/Anime: The Crow, The Labryinth, Cradle of Fear and Underworld 1+2

I live in Chav filled England with my moody mum and chilled out Dad. Ever singe Poke'mon I've been obbsessed with Anime! I luv it and the characters are great! In engalnd Anime gains a small fan crowd but not much, people would rather watch stupid Soaps!

I have a weird personality (Weird meaning split) one minute I'll be depressed the next I'll be dementadly hyper. I've loved drawing ever since I was a kid my dads bin real supportive to.

I can only draw Anime and didn't take GCSE Art due to the fact I hate being told what to draw and like to do it at my own pace. I'm reallt intellegent compared to most people and love history, hate .P.E. I behave well and don't do anything underage! (Unless it's seeing a good movie)I also think that anyone who has kids under age needs to be executed, Prostetutes are filthy and need to be eliminated and Single mums with kids to different dads are people who just don't know how to say "No!" I am very Facist and if I get into power... Muhahahahah! (As if that will happen)

I love my gothic style and wouldn't change it! I hate wearind makeup like Matte mouse/Foundation or Fake tan (Pale is beautiful), the world has been tainted by it's glow!!! Thats why no one thinks your breautiful unless you wear 10,000 layers of makeup! I prefer natural beauty.

My boyfriend Mark is the greatest guy ever! Hes about 6'3 feet tall, long blackish brown hair, really slim and none muscular, very feminine absoulutly adores me and a complete phsyco! He often says that if he ever went to his prom he'd have taken an AK47! He turned 17 in April and had similar experiences to me at school and went straight on to college instead of sixthform. I treat him like my dog but in a loving way. I can even dictate what he wears LOL! This is only cos I've watched my mum be messed around by my dad.

I have a demented imagination, I often dream of killing my bullies. I'd make them suffer and squirm! I love revenge! My own sanity has been bullied right out of me and so now: I have severe Paranioa and have fits of violent shaking, Rocking backwards and forwards and have trouble breathing. I hate when younger kids bully me and if I try to stop them they go crying to their older brothers and sisters who say "Their younger than you so it's not bullying" it dosen't make a difference and they deserve to die aswell! Now if theres any of you out there reading this: You've broken me and a wiccan curse on you all...

Merry (extremely late) Christmas to you too :D
I just got a DS for christmas :D *parties* ...and I have to read Twilight and the series A.S.A.P. before Lane tells me everything XDDDD he-he.

I'm fine had a graet Christmas!

Awesome! =D What were some of the things you got for Christmas ^.^

lol XP we had 3 noisy friends over all Christmas Day. (except for in the morning)

hey want to friends! lol i like being obesessed with Axel!^^ 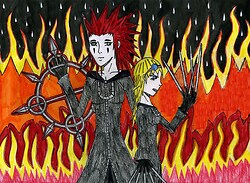