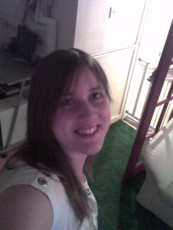 *mumbles* wish I had me own ship then me pirate army would be immense.....*goes back to making a pirate hat*

Well I've drawing my own characters sine i was twelve, and am still doing it now years later ^^ only now they have developed somewhat! I really like to draw cartoons and comic strips, but I also do a lot of paintings and pastel drawings but I reckon my best mate is my black biro and dispite what the ex tutor says IT IS OK TO USE A BLACK BIRO WHEN DRAWING STUFF!!!!!!!!

I've always got a pen in my hand...constantly, if it wasn't for my guitar, I think I'd chop off my fingers and glue pencils and pens on them instead!

I LOVE music, and when I say music I mean it's written, performed and the band actally perform together. Favourite bands are:
*The Offspring
*Killswitch Engage
*Less than Jake
*Last Days of Vengence
*The Presidents of the United States of America

I'm a gaming girl that has a fascination with resident evil, devil may cry and Silent Hill. I like games that make me think, but not too much because then i dribble and then no one's happy =p Wesker is my favourite bad guy (next to Nemesis ^^) i thinks he's great!

I'm really into comic books and have attempted some of my own based on what me and my friends have done.

I really appreciate honset ppl...so if a drawing of mine sucks, then please tell me how i can make it better. What i dont like is ppl telling me it sucks without an explination.

Thank you so very much for the fave, cherie :).

Thanks a ton for the comment!
If you ever have any requests, I'll be happy to do them.

Hey, I don't know if it's approved yet, but I made you something!

^^ hello! :D
How are you today? There is a storm going on here right now :S I love this weather :D

Cool i love storms too! It's just stupidly cold here brrrr may have to invest in a new coat =p

hows you? Hope you are well ^^

Helloo ^^ It's getting closer to starting uni.....and i'm so nervous lol!

Comic's finished! Check it out, I think you'll like it...

:D Hello again! How are you then?

*yawns* Lordy am i tired ^^ thank goodness i can sleep and eat alllll day lol
Go to page: 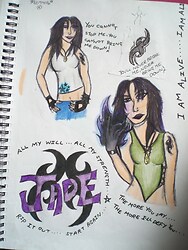