Hey, what's up?! XD I think it's fun to show your work to ppl who also like the same things as you, ya know? So yeah, hi. I am willing to be anyone's friend and if you like Yu-gi-oh or yaoi in yu-gi-oh like me, you already have a head start to me liking and getting along with you. I wont ever flame art work. Hey, you all have to start somewhere and what good is it to put ppl down when they are just getting started? That's just mean.
Hell, they could be great artists some day and you may cause them to quit drawing with your insults. But, hey if I don't flame your work I would like to get the same respect with mine, please? I spend long hours working on my stuff and would hate to have someone telling me it looks horrible to them or something. If you have a few pointers that is fine, but yea no flames please. Thanks.

Anyway, ah yes...I love Yu-gi-oh. Probably my one favorite anime but I have others too.

I also have fav. bishies from just about every show. I am not one to be jealous of other fangirls liking my bishies and claiming them as their own so please don't mind me if I call them "My" bishies or something. B/c I am not trying to start anything by it.


And now I have more bishies to add b/c I made them myself:
Jagger
Aiden (friends OC)
Vito
Jaden
Trent


Those right there are my fav. bishies! ^^ You gotta love them all. Also I am a HUGE, and I mean like GIGANTIC fan of Yaoi. I hope nobody thinks diff. of me b/c of it. I just can't help but to like it. It's HOTT! It's just like how some guys like two girls together b/c hell they are girls and they like them, well I am a girl who likes seeing two guys together b/c I like guys in general. Two of them is just double the hott-ness. But it can only be certain guys. However, I have nothing against gay ppl so don't be thinking that know. Hell, I encourage it...if you are gay you can't help it ya know? But whatever, when it comes to Yaoi in certain anime....oooou look out b/c I will steal it all!!!! MUWAHAHAHAHAHA!!! *Cough* sry bout that...^^


InuyashaxSesshomaru(Yea, yea, I know they are brothers, but oh well it's hott.)
KogaxInuyasha(Hehe, puppy love!)

LegatoxVash (Pretty hott, I mean they both are, so hey it makes it better. ^^)

ShuichixYuki (That's pretty much how it is anyway, and yea it's hott too. Shuichi is just to cute!)

JaggerxAiden (from our role-plays, I LOVE this pairing!)


Lets see, now what I look like...well I am kinda short, 5'2 to be exact. I have green eyes. My hair color varies from black to blond. I usually change it every few months. As for how it is cut, it's pretty short (like a boy's in back) and I keep it down on one side so it covers my eye. Some people think it's an Emo look, but whatever. Hmmm...I have an average build, not too skinny and not to big. I usually dress in a t-shirt of some sort, blue jeans, and a black hoodie. If I'm in the mood I do my goth look, pile on the dark make- up, break out the fishnet stockings, and go in knee-high boots! YAY!

Things I hate:
Snobs
Preps
Rich people
People who don't STOP talking
People who DON'T talk at all and just stare at you
Music that is just screaming (Ah the headaches)
People who are mean
White people who try to act black
Black people who act like gangsters(Not trying to be racist here)
The colors yellow, brown, and orange
Teachers who are jerks
Homework
Projects and reports
Fanfics that are horrible (Like ones people screw up on purpose)
Pics that are horrible (Same thing as above)
PB&J (YUCK!)
Siblings (When they act dogy)

Things I like:
My friends (The good ones, some people just follow me)
vampires
anime
Bishies
Manga books (mostly yaoi ones)
how to draw books
photoshop users and photoshop
yu-gi-oh, YAMI AND YUGI! (Hotties! -^^-)
yaoi (and other pairings)
drawing
good fanfics
good fanart
nice people
Gothic clothing
typing fanfics (Sometimes, like reading them more)
comments on my work
leaving comments on other people's work
make-up (at times, usually to lazy to wear it)
food!

Important:
Ok, I am no longer doing requests. As you have noticed, I am lazy and they never get done so instead of disappointing you ppl after you already ask me. I am just saying no now. I may do some art trades, but I am still not positive on that either.

Also if you have noticed my fanfic is gone. Yes, it was rated explicit, but that's not why it was deleted. Every time I post a story on here the text gets screwed up really bad, so no more of my stories or past fanfics will be on here anymore. You can find them on AdultFanfiction.net, which is an awesome website for higher rated fanfics. If you haven't read my story yet and would like too, it is titled 'Tired of Waiting.' It's a YugixYami fanfic and is rated NC-17 for yaoi content.

I have made another profile on Hentai-Foundry as well. I am going to be posting any explicit content on there from now on, may also post just the mild stuff on there to be safe too. My name on there is DesertRose. So, if you're interested in any of the higher rated pics that's where they will be. There wont be much on there right away though so you may not find anything on there for sometime, but when I do get to drawing -really- inappropriate pictures that's where you will find them.

and...are you still busy ? ^^; because I want a tutorial of how to draw wings like angels wings...fairy wings or others..XD I have many things that I can't draw...especially animals, dragons and dinasours...-_____-

oh ya! if you really want to make a new account..tell me..okay ? ;) I like dragons and dinasours too! they're cool but somehow I can't draw them well..><

just to tell you that your drawings are still awesome! ^^ 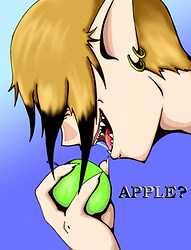