i use my phone as a camera yay and i like friends so if you wanna be mine thats cool ^__^ i have a lifemate *husband in human speak hehe* whom i love hehe hes my world and is more commonly known as kiba/alchemest 1 he is my one and all!

*ISLAM If shoot happens, it is the will of Allah.

*PROTESTANISM Let the shoot happen to someone else.

*JUDAISM Why does this shoot always happen to us?

*HINDUISM This shoot happened before.

*CATHOLICISM shoot happens because you're BAD.

*CHRISTIAN SCIENCE shoot is in your mind.

*EXISTENSIALISM What is this shoot anyway?

*STOICISM This shoot is its own reward.

*WICCAN An' ye do no shoot, do what ye will.

*NEW AGE This isn't shoot if I really believe it's chocolate.

*NIHILISM Who gives a shoot?

*ZOROASTRIANISM shoot happens half the time.

*ZEN What is the sound of shoot happening?

*SANTERIA shoot Happens to your goat.

*MARXISM This shoot is going to hit the fan.

*MORMONISM This shoot is going to happen again.

I'm okay, thanks. Just about the same as usal. Hope things look up for you soon.

Awh, are you okay, Jenny? I can give you company! And I hope you weren't lonely for long. ^^ I've been alright, kind of tired and nervous at the same time. You?

I know, it's been such a long while! :) I'm glad to hear from you and Kiba, I miss you guys! How have you been?

It's no bother to hear from you...how many years has it been? I feel neglected now! XD
In all seriousness, how are you?

Thank you for commenting on my newest pic, btw!

I FINALLY submitted that pic I've been talking about, Kilynn!

Yes, I am very happy :) I just need that scene to be a reality, lol. Thanks so much for that; it certainly did perk me up...lol, meaning within the meaning.
Good talking to you! Pop on again sometime :)

If that's a 'sneak peak', I can't wait to see what else you cooked up!
Go to page: 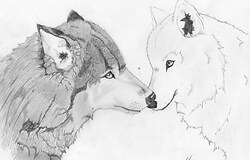