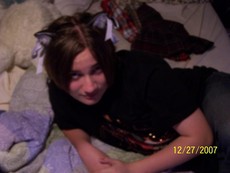 I'm proud of my life and the things that I've done. Proud of myself and the loner I've become.

Ah! HEY GUYS!! *waves* I'm REALLY sorry it's been FOREVER since I've updated, but I swear I have'nt forgotten about you! XO
I'm just never drawing anymore D:
But I do have a few new pics. I'm just waiting for them to get uploaded on my computer right now! So talk to me if you want while waiting! :D

Any ways, I'm up for any requests. But I have a thing, and that thing is, I'll draw pics with (these are optional) you in it, Kingdom Hearts 1, Kingdom Hearts 2, Chobits, Final Fantasy 8, 9, 10, 10-2, and .Hack and any faeries, elves, or woodland creatures, and a character you made up!

Also, I won't draw Inuyasha, Fruits Baskets, Teen Titans, or some other little kid show. Just ask me what you want and I'll tell you if I'll draw it or not.


Just leave me a comment and tell me what you want with pics if it has you in it. Also describe the picture, don't just put I want a pic with Chi and Me. That won't do. Say something like, I want a pic with me and Chi sitting by a lake looking at the sky in the woods.
Alrighty!

OK!! Only 4 pictures requested at a time please!

Thats it and feel free to comment or whatever =)[/align]

omg omg, i havent talked to u in forever! how u ben girly?

Hi I love your art it's so amazing.

I felt the sudden and random urge to show you this fanfiction:
http://www.fanfiction.net/s/2917647/1/Outside_The_Window

It's AU, of course, but it's so sweet and sad at the same time. I loved it, and I thought you might too! <3

*gives big tackle hug* Hey! Haven't talked for a while! How's it going? 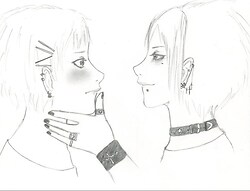