Yo. My name's Lindsey, otherwise known as Tinsey, & I'm an 18-year-old from Wisconsin, the land of the cows. Here are some things about me:

Best quotes EVER
"Nobody ever groped Jesus in the Bible!"--Moi
"You mean he's single like...like this dollar?!"--My pal Becky
"I don't believe in Jolly Ranchers."--My friend Missy
"We call her Bruce Willis because Armageddon happened on her face!"--Mon amie Cori
"Go go Crusade Rangers! It's maraudin' time!"--My buddy Maxwise the Brave
"Clouds? CLOUDS?! Who wants to see clouds through a shirt?!"--My friend Kim
"She's going for the Haunchy Thumper!!"--My awesome bio teacher Brian
"The three things I hate most in the world: Cancer, AIDS...and glitter."--My awesome freshman religion teacher Richard
"What do you want to want to steal LINDSEY for?! She'd only get about 10 bucks at a black market!"--My amazing math teacher David
"The best way to learn is by doing, but most often the lesson learned is 'Don't do that.'"--Quote of the day from my creative writing class
"I have defeated the Weeble."--A guy in my creative writing class
"Parlez-vous fromage?"--My boyfriend Rusty (Hee ^_^)

I'm obsessed with Julian Sands and several of the characters that he's played, my favorites being Nick Hardaway, Valmont, George Emerson, and Vladimir Bierko. What can I say? I dig British guys, especially terrorists and crime lords. *Pets Vladimir and Valmont* I like to slash characters together, and these are a few of me favorite pairings:

I can't help it, I'm a slash addict. I do support some canon/straight pairings, but it's always fun to twist things a little bit. And I'm sure that if any of the guys who play the characters listed above saw this, they'd hunt me down like a badger. But that's why it's fanart/fanfiction! ^_^ So if slash isn't your thing, please be kind and don't flame. Try to focus on the quality and hard work I do instead of the content.

I have found an artist who draws JCA fan art at last! I am so happy. Not a fan of the slash(since I believe that's wrong), but I don't hate anybody. I need more JCA fan art, though. I love that show! However, why is there no Jackie/Viper art? That was the only canon pairing and it is adorable. Keep going. :)

Thank you for the picture favorite.

You're welcome!
I agree X3 I also like tatu!
and yes, Batman/Joker slash >XD

I love your art :33 especially your TDK art! XD

wow dude way to have the number 23 infront of yur face...tho personally yur much more babe than he is lol...love ye chicklet 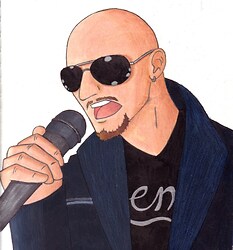 Until the Night is Gone