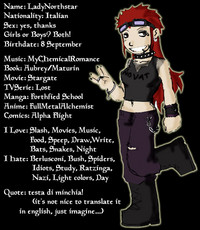 I'm a dark (a darky darky dark) who don't own anything of a color dif from black (excepted some purple shirt...)and love collars, fangs,lace, velvet and pins.

I love rading comics (i really love it) and i own about 1.500 volumes,most of them are mangas, but i've too american's and italian's comics... yeah, i really love comics

I draw about all the day, especially at school, and if i'm not drawing i write or i sew my cosplays... you can deduce that i don't study so much! XD

I'm a fag hag, i'm a pacifist, i'm a yaoi-lover and i'm mid-lesbian, so i'm not "normal".... but normal people aren't interesting!

In my past life i was some kind of monk, i guess... and i think this because i'm so tolerant and so patient that i seem a buddist monk....

i've a little sister, she is a brat but i love her.

i play D&D and Vampires the Masquerade, and i really enjoy them... in the first i'm a mid-drow monk that look like Skin and hit like Tyson and in Vampires i'm a Mlakavina, who talk with objects... it's really funny exasperate the brujah talking with his gun, reaaaally funny

i love people and people generally love me, excepted priests... maybe because i look like marilyn manson with breast.. maybe....

I'm glad to know everyone of you, and if you want to talk to me my msn is northymustang@libero.it

I LOVE LOST! SAYID IS THE BEST!

Yo! I have an account on DA, but it's getting too complicated for me (I'm not that smart ^.^U), so I'm gonna stick around here for now. Yup! Just wanted to say hi. ^_^

Ooh, I just love your art! ^^ I haven't commented because I can't decide which pieces to comment on- they're all pretty darn sweet. :3
Anyways, I was wondering if you (and Jack XD) still take requests.

hiii! sorry for the late answer but i'm just re on the site, cuz my computer was gone... ^.^;
aye, i still take request! so ask!

Anyways...I can't decide between two, and both are really strange, so I'll tell you both and you can pick one, I suppose. They are both slash. I'd like either Jermaine/Omi or past!Guan/Chase (as in, when Chase was good and Guan...had hair. XD) I'm sorry I request such weird things, but...

Well anyways, thank you so much!

U said that U did requests, so I was wondering if U could do one for me!!

Just drop a comment on my pro, and I'l drop the details if yes.