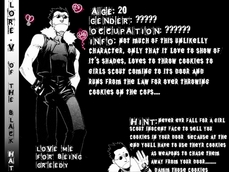 Ok now for those who don't know me alittle of my self you little freshmen........

(Info from I.D)
Age: 20
Gender: ?????
Occupation: ??????
Info: Not much of this unlikely character, only that it loves to show of it's shades, loves to throw cookies to girls scout coming to its door and runs from the law for over throwing cookies on the cops.

Hint: Never ever fall for a girl scout inocent face to sell you cookies in your door because at the end you'll have to use their cookies as weapons to chase them away fro your door......... Damm those cookies.

Other info not included in the I.D

It hates: Stalkers, boringness, been chase by neighbor....., critised it style, girl scout cookies, and other things I can't remember right now.

Fav Anime
Fullmetal Alchemist
One Piece
Eureka Seven
Dragon Ball/ Dragon Ball Z "Dragon Ball GT sucked for me"
Sorceres Hunter
Ultimate Muscle
Digimon "What? I was a kid"
Cowboy Beebob
Trigun
Big O
Wolf Rain
FLCL
Sailor Moon "Every body in my childhood got me into it from boys to girls"
Astro Boy
Kikaider "I think its spell like this"
Slum Dunk "Got to love that one"
Cybor 009
Zatch Bell "So addictive"
Bobobo-bo-bo-bobo
Escaflone
Samurai Pizza cats "old anime"
Viewtiful Joe
Hellsing
Hamtaro "Hey I have a Hamnster name Bowser Jr."
Naruto
Samurai Champloo
Princess Tutu "I just love the fantasy in that cartoon"
Saint Seiya "Really old cartoons"
D-N-Angel "Saw some episodes and loved it"
and other ones I can't remember right now........

Fav cartoons
Foster home for imaginary friends "I use to have an imaginary friend as a kid"
Camp Lazlo
Kids Next Door
Cat Scratch "Haven't seen this cartoon for so long"
Ed Edd & Eddy "A small version of me, my cousin & my little sis."
Xiaolin Showdown
Fairy Od Parents
Grim Adv. of Billy & Mandy
Invader Zim "Only airs at the other Nickelodeon channel"
Corneil & Berny "Really hilarious cartoon that only shows at the other Nickelodeon channel that I don't have no longer"
CatDog "The same with this one like IZ"
Eek! the Cat "An old cartoon"
Dexter Lab "Only the old version"
Tom & Jerry "Old Classics"
Popeye
Jacky chan Adv.
Mucha Lucha
Futurama
South Park
Simpson
My Life as a Teenage Robot "I just love Jenny"
Batman Beyon
Batman "The old ones from the 90's"
X-men "Again the old ones from 90's"
Scooby Doo "This is for my mom"
Attomic Betty "Just because the little robot reminds of my sis."
Samurai Jack "Really happy to see them back"
Courage the cowarly dog "It reminds me of my dog"
Angela Anaconda "I just love to laugh"
and other ones I can't remember right now........


Screen Shoot of the Week
Every Week I will try to host you people some of the screen shots I get in my comp. wille I work in a pic. or when theres a cool even that happens what so ever......:] The reason.... Well is because I just Love to screen print alot that I just can't be the only person to see them I want that my friends get a chanse to see what I do in my spare time wille working on the comp.

Well this was taken since a long time ago, when I was working on my first pic. of Greed, I know many people and friends know about the pic. "fracking up Greed" Well this is just a shot on how I was working on the pic. back then..........^-^

Other:
Theres an other place were you can see some other art of mine in here in this site:

In here you can see some Oekakies I draw some times is not much right now that I have work and I have little time in there..........^-^

Hey, this is sis, I changed my acount. Can you fave me on this one? Like on the other one?

I haven't posted anything in years because i lost interest in drawing if i can only share with u guy with msn paint but i suddenly gotten a new inspiration and will start posting art again I'm learning new techniques and stuff OH and btw I'm 13 now :/ oh and WUTS UP HOMIE ur arts real awesome

Hey! Sorry I don't ever reply back but my computer is always so stupid.

But anywayz, Hey! Hope you have a great day!

Hey babe!
Remember me?You know, You can forget about that art request i asked for. instead can you make me a shirt picture (you know the picture that appears on a shirt -.-)

I'll give you a pic. lol Its all about peewee Herman! (im in love with him!)
Go to page: 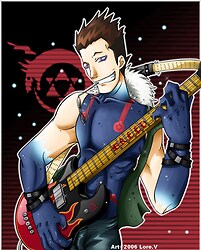 Rocking on Greed Rocking On!