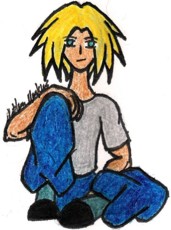 I've been drawing for quite a while now, a few years, starting mostly with little stick figures in the margins of my school notebooks in third grade. You'd be amazed at the amount of people and scenery you can get in there. Then I started drawing creatures, having been drawn in by the Pokemon fad a few years ago, always wanting to make my own. After that came weaponry, lots and lots of melee weapons, swords, knives, axes, pikes, spears, a shield or two, but mostly swords; enough to fill a few notebooks. I also draw characters for my stories, as well as friends' stories. My weakest points are drawing hands, and proportions.

Stories:
"Endless Summer" - Prologue is up, just to give you all something to read, reread, and then read again while waiting for the first actual chapter.
"Jedi Titans" - The first chapter for this story is also being planned out, though I am waiting for anyone who has suggestions for characters.

hey what's up. I haven't talked to you in ages. Anyway, hey I have an idea for your Jedi Titans thing. I made a version of my character Gabriel. If you want you can use him.

Hey, nice drawings!!! I just posted two new drawings. You can check them out if you want to.

Your my kind of person, he likes his melee weapons, great work on your characters as well

Yes,I was on it I remmber,I guess you don't remmber me.

Hay why did you take me off your fave list?

You haven't fought him yet? Did you know that you have to take a specific route? Lemme help you a wee bit: If you're really good with Mitsurugi, go through Tales of Souls and when you have to pick a choice after a battle (say, either go to Europe by boat or on foot. That sort of thing.) always choose the second option. You'll go along a....slightly different path.
Go to page: 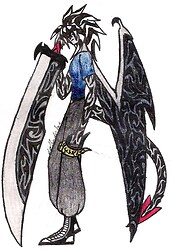