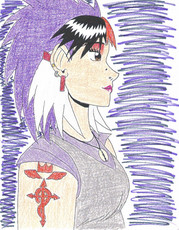 I am part black, part white, part hispanic, part Mayan indian, and part other I also like yaoi fan fics, especially with Yu-Gi-Oh! I respect other artists, including those who are better than me. I am from Brooklyn, New York, but my parents are from Belize.

For most of my life, I always get compliments for my artworks. In early 2005, I helped painted a mural in my old high school (I transferred because of issues). When I grow up, I'm going to be a manga author/artist.


i wrote some fanfics.if u like to see it, it's:

i might write some more. And guess what? I am now known as Boogermeister on fanfiction.net. I should have joined sooner though.

I'll write side stories and/or sequels on fanfiction.net My pen name is Boogermeister there.

Over a few months ago, I went to zelas.net and clicked to Dark Roses. There they have Doujinshi(fan comics) of Yu-Gi-Oh! mostly yaoi ones, especially with Bakura/Ryou. Be warn: it's pretty graphic in there.

My avatar is my niece Tamari. It's cute 'cuz she is named after Temari from Naruto and it was my idea to name her that.

Bleach-. . .uh, Rukia's brother(I'm having a hard time knowing their name due to the fact that there are several dozen characters), Urahara, Chad(not as a bishi, as a cool dude)

Type of guy I want as a boyfriend:

3. can play a gutair and/or sing

4. doesn't mind if I read Yaoi

5. must be smart yet cool and funny

contest!! for more info check out my profile!
Im taking drawing requests too!!^^

Please upload more of your funny YGO art ^^ I think I'm not really in the mood to draw right now, since there are already 5 people who keep calling me an artthief and I'm getting crazy of it >.<

I'd love to but I have six major tests coming up!

poor you =( I have some major tests in about 3 weeks

=-_-= yes well. I gess u could call me a freak. But a freak of Inuyasha and of cats. I believe I'm 5/10th human (unforturnetly O\_/O+) I look human, 3/10th cat cause I can eat, sleep, drink, run, walk, trot, speek (yes even speek)and do everything a cat can do, 1/10 fox cause I "YOUS" ok "YOUS" to steal and lie my way in and out of things (something still do)and 1/10th wolf because in 4th gread I acsidently started tairing a piece of flesh off and kids arm (he kept touching me in certen areas) and ever sence then I've been violent and vishue. Just like the gray wolf. Beautiful but killingly deadly. But Nekoasha is how I am. In short... I am a demon. A cat demon.
"RRRRRAAAAAAOOOOOOOOWWWWWWWW!!!!!!!!!!!!!!"
*demon roar like howl*
I am honered to be ur friend. And I shall protect you with my life. Because my friends r my family cause my real family treats me like nothing. So all I have is my friends. Without them I'd comit suiside (I sereusly tryed once). My friends r all I have left to live for. So you like many others to me, you r now my sister. And I shall treasher you dearly. Welcome to my Clan sis. =^v^=