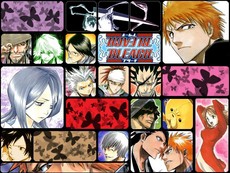 Hii to you all!! My nickname is Anika, I'm from Chile, a thin and long country located in South America ^^

Okie, first of all, I prefer manga over anime mostly because I love to read and because my head hurts when I watch TV ~___~ and I get bored easily at it... dunno why ^^;; ah! and I also think that manga is a lot more expressive than anime... but this doesn't mean that I hate anime or can't watch it, because I like it anyways X3
And so my fave manga is Bleach! OMFG Bleach rocks!!! >___< and my other fave ones are Fullmetal alchemist, Naruto, One piece, D.Gray-man, Shaman king, Flame of Recca, HanaKimi, Saiyuki, Hunter X Hunter, and the list goes on ^^
My fave mangakas are Kubo Taito, Hiromu Arakawa, Kazuya Minekura, Maki Murakami, Youko Maki, Arina Tanemura, Hisaya Nakajou, Tohru Fujisawa, Nobuhiro Watsuki, CLAMP, Oh! Great, Kentaro Yabuki, and so on ^^
I also like yaoi and shounen-ai and I have no problem with yuri and shoujo-ai... I'm kind of open minded at this subject =3 (except that I can't stand incest ~___~) and so I have some more favorite mangakas in this category xD

I like drawing, reading, playing gameboy advance, super nintendo, tetris, and rpg games, and well... Chrono Trigger is the best game ever!! xDD and I'm planning on getting to play all the coolest rpg games for gba and super nintendo and then buy my own playstation (who knows which one it'll be around the time) once I get out of university and get my degree! ^o^ (because I don't have money of my own right now ^^;;) what a poor goal in life I know... ~___~
As for painting, I recently started to like using pencils, crayons and watercolours (though I don't use the latter one too often)
And as for reading, my fave writer from all times is Stephen King!!

Oh and I'm sorry but I just have to say this, because this is something that I totally DON'T like and have been seeing lately... I really REALLY HATE it when people draw the same pic they have seen before somewhere or at least pretty similar (or based on the same idea) and don't even bother (or don't have the courage) to point out that it's NOT an original idea... I just think that it's not right to take someone else's credit for it or keep silent about it. Well that's just my viewpoint of it =3 so if anyone doesn't agree with me on this, that's totally okay with me and he/she has all the right to say what he/she thinks ^^ and I just had to say this because I guess it's what I hate the most here in FAC

Okie, going back to what I like, my fave music is metal, rock, celtic and symphonic ^___^ I have a lot of fave bands :P and as for J-music, I love Asian Kung-Fu Generation and Yasunori Mitsuda, and I like some other bands and singers like Siam Shade, Maaya Sakamoto, L'arc~en~ciel, etc ^^

Oh and btw, I don't really like to do requests, but I'm fine with art trades ^__^ because it's more fun xDD[/font]

Hey there how you doing?

Hey how you doing?

Hi can I have a art trade please?

Hello!! Nice to meet you! Yes sure, it would be fun ;P ah but, I'll probably be taking some time to do it since I'm not having much free time in my hands right now ^^;; sorry about that! please let me know if you still want to do it and what you would like for your part of the trade

Can you draw me and Zane together and he from yu-gi-oh gx and what do you want me to draw for you?

Yeah sure! you are the girl in your profile info pic? if so, do you want me to draw you with the same 'yu-gi-oh clothes'?
as for me, could you draw me a pic of Ed and Roy (not yaoi) from fullmetall alchemist? I really like those 2! please? ^^

Yep and yes and sure I can try and can I draw on the computer?

Sure no prob! if you feel more comfortable that way ;)

Thanks and I'm going to get started right now!! 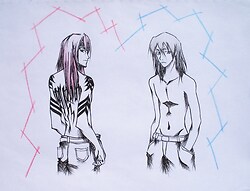