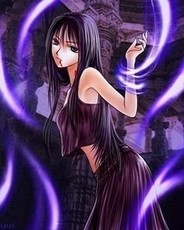 Remember, when in doubt, ask your other personality. The fact you may have five of the little bastards up there is your problem.


Zachary:I can only agree with Belle on this one...

Me:*sigh* Sometimes I wish he'd at least argue...
From the depths of my mind this week:
Belle: WILL YOU SHUT THOSE TWO UP?????
Me: Who?
Belle: SHIKAMARU AND GAARA!!!!
Me: Gaara hasn't said shoot all week...
Belle: SHIKAMARU'S BEEN YELLING AT HIM ALL WEEK!!!!
Me: Yeah...so....Gaara stole his fishnet shirt.
Belle: And there's someone else in the emo room.
Me: I know....Who is it?
Belle: WHO THE frack CARES??? I JUST WANT TO KNOW WHAT THE LITTLE frackER"S DOING IN THERE!!!!
Me:*sigh* SHIKAMARU!
Shikamaru: What?!?
Me: Quit screaming.*looks at belle* Happy?
Belle: No....Konohashie isn't allowed in Gaara's room anymore, because he has a new friend.
Me: So, who's she going to hang out with?
Belle: Zachary?
Me: That beat-up wuss?
Zachary: I heard that!
Me: GO TO HELL!!!!
Zachary: I'm going to my room now...*Limps to his room*
Me: GAARA!!!!
Gaara: *peeks out the door* What the frack do you want?
Me: Who else is in there?
Gaara: *nervous laugh* Well, now that you mention it...I was going to tell you...um...
Me:*glare* Who is it?
Gaara: Um *peeks back inside* Come on out.
Sasuke:*walks out* Hi?
Me: Oh, frack no. Get the traitor out of here.
Belle: *smirk* Gladly. *drags Sasuke off*
Sasuke: What's she going to do to me?
Me: *smirk* And Gaara, you get stuck with Savannah for a day.
Gaara: No. fracking. Way.
Me: *glare*
Gaara: NO.
Me:*stands up*
Gaara: *runs back into room*
Me: *sits back down* No way in hell i'm going in there.....

92% of the teen population would die if Abercrombie and Fitch told them it isn't cool to breathe. If you're the other 8% laughing their asses off, post this on your profile

death can be beautiful...

hey do u role play

Belle Morte roughly translates into Beautiful Death. Truthfully, it should be mort belle, but I chose to do it this way. Belle Folie Cauchemar is a cool one. Beautiful insane nightmare. Roughly translated as well.

i asked that cuze i am french

Interesting. I just see it as a hobby. Learn another language, and you have less work in college.

No problem. It took me whie to figure it out myself.

Then, submit the document from whatever program you wrote it in by clicking on the BROWSE button (Microsoft Word, etc.).

Next, you go to STORIES.

After you fill in all the information (like the title, genre, description) you choose the document that you just submitted.

And voila. There ya go.

Surely. Here it is:

I updated my 'A little drink never hurt anyone, right' Story... if you wanted to know.

Thanks! Heading over there now!
Go to page: