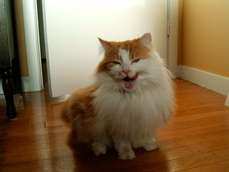 Eyes: Depends on the weather. Mostly brown, on occasion green. sometimes a steelish blue-green color with a hint of brown.

Dislikes: Schoolwork, Animal abuse/testing, Child abuse/endagerment, assault of anykind, Rasism, Sexism, or downsizing of any kind & the majority of the worls population.

Favorite Person EVER: Myself

Cameron-"People... Dismiss me. Because I'm a woman. Because... I'm pretty. I don't think my opinion should mean less just because people don't like me."
House-"They like you. Everybody likes you."
Cameron-"...Do you? I have to know..."
House-"...No."

Cameron(to house)-"Alright, fine! I've hopped on the band wagon! I hate you now too!"

Cameron(to house about her HIV results)-"This is the most important moment of my life... and you're still an @$$."

Wilson(to House)-"Being Miserable doesnt make you better than everyone else... it makes you miserable."

Cameron(glances at her watch, waiting for the boy to be done the sperm test.)-"Too bad it wasnt you in there, Chase. We'd be done already."

Cameron-"You can't tell me that 'we're friends not collegues' and then chat about the afterlife!"

Illyria: "Is there anything in this life but grief?"

Booth: "What? You wan't me to spit in my hand? We're Scully and Mulder."
Temperance: "I dont know what that means.

Ms. Bishop-"Do NOT throw that pencil, or I will open up the door and do the same to you. I am small, but mighty!"

Greg-"I hope you know, while we were in the shower, I didn't see anything."
Sara-"Really? Gosh, I saw EVERYTHING!"

Sara-"So there we were at Cupids Kiss, a Nuptial Neverland where the cheese factor was dangerously high, and the flowers were obviously fake. Can the love be real when the flowers aren't?"

Suspect-"So where did I go wrong?"
Grissom-"You killed two people."


=STATUS=
+Request things of me! I need something to do!+


~Obviously, i take requests. If i like you a lot, i might make you a gift picture, just for the hell of it. I do to art trades aswell. I will keep drawing the picture until you are completely satisfied.~

I like everything. Girlish boys, boyish girls, fat, skinny, which is a real problem when I'm walking down the street.

Hey, Ive got a new account! Im sannetangel, remember me?

What happened to the weird house md pics??? :(

Hey captain whats up? i know haven't been on for like forever but there is thsi pic I just pu tup that i want you to check out! I've been traveling alot and I haven't been near a computer in a while sooooooooo jsut check PWEASE! O'll be your best freind!

can we be friends Charlie 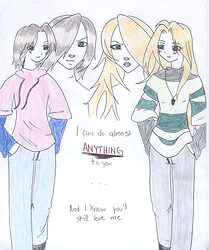