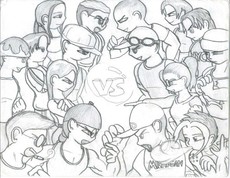 If you want to know ANYTHING... Message me. I'll tell all.

Oh yea! If you have a request... Drop me one of those as well ^_^!
Seriously... I like a little diversity in my art, but have a heck of a time deciding what to draw.


I'm really looking to make some artistic friends with similar interest. LOL
I also play WoW, and Halo...
Lemme know if you wanna swap Gamertags or anything!

-Pic info-
I only use Pencils, Ink, and Colored pencils so far... Any that I can find...
I'm not going to go and spend like $30 on some Colored pencils... Break dancing doesn't pay that well!

Special thanks to Narugirl, for coloring some of my pics!
She also only used the Crayola 24 pack for my drawings... Thanks again!

There are also a few drawings on my Myspace page that I have yet to post here... They can be seen at myspace.com/gogosause
However they aren't as good, so don't get yer hopes up.

My Naruto Comics:
It's not that I HATE Naruto... but um... well... Never mind.
I labeled the comics as "Moderate Sexual Content" Because there is NO Nudity... (AND FAC wouldn't let me put it up if I labeled it as "EXPLICIT"! O.o) I also left them in Japanese so that if you REALLY want to know what they say, you can look it up. However if you have a bad sense of humor or any other such ailment, then It's probably for the best that you don't know ^_^. (I don't need Naruto fans leaving flaming bags of Poop on my door step!... For real... I know how y'all do!)

I wanna request can you draw me and Zane together and here what me and Zane look like:
http://s876.photobucket.com/albums/ab325/VictoriaZepeda/Zane%20and%20Victoria/?action=view&curren...

"I'm just a priest and life is a nightmare, I'm really squishy and rouges are just unfair!" hahaha Rob was singing that the other day wile pvping on his holy priest of undead squishiness. ha! Anywhooos.... hows it going? havnt heard from you in a wile. just woundering how you are and how those pics are comming. My Lock is now 70 btw, but I still go squish... i need to hurry up and get the rest of my epic PVP gear. i'm getting SOOO sick of AV but that gives the most honor in an honor grind.... gad i hate Alliance. [no offence ment of course. :) lol] anyways, cya!

Yea... Priest ARE pretty soft, but JEEZ If they can get a Heal off on a Buddy, that Buddy NEVER DIES!

AV is like a Locks playground ^_^ and the Gear reward is WELL worth it in the end... My lvl 70 is only in Epic PvP gear, and I STILL plwn people in Arena top teir! LOL... but I guess PvP is more a Game of Personal Experience than it is a Game of Gear... (although that gear DOES look cool, AND it helps!)

yeah, that all IS true. moveing? yeah i am trying to move there too... i made a account there... I'm Midnightmoonlover13 I'm going to deleat my FAC account soon.

Yup... Breaking with all these Kids keeps me in shape! LOL.
I've actually moved over to DA... This place like to put the Lock down on my adult pics, But I still check in from time to time. So feel free to make a request ^_^... Otherwise, my pics will probably be few and far between (Like they haven't been already! O.o;)...

Hey, i have a question

how strong are draenei shamans? :/

Strongest shaman on the aliance!... LOL... (little ally humor there ^_^)...
Ehem... anyway... Like the Blelves, the Drainei are primarily a magical race... There for a Drainei Enhance Shammy isn't gonna pack the brute whallop the a Orc, or a Tauren is... the magical Drainei Shammys however are pretty strong.

In my personal oppinion though, It doesn't matter WHAT the race is... you don't want to be on the recieving end of an Enhan-Shammy's Windfury. A Shammy is STILL a Shammy!

Yeah, I've been taken a break from halo.

Yea... Just got off my Halo break.
It's MUCH easier after some time off ^_^

I have 8 new pictures if ya wanna see em

I just fill it in with a marker.