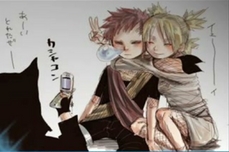 Hey guys, I have a major spell of loopiness coming on so I don't know what I'll write.

I love this anime!! The best one EVER! Beats Fruits Basket shootless, if you ask me.

My favorite character EVER in the entire world is SABAKU NO GAARA!!! I love him and he is mine!!

I also love Zabuza and Haku. Zabuza because he's a frikkin BAD @$$ and Haku because you can pair him with damn near anyone, he's so girly. But I HATE HATE HATE FRIKKIN HATE Zabuza/Haku. Their relationship is purely Dad and Son. NOTHING MORE, DUDES! It's gross!!

Same goes for Kakashi/Sakura. It's okay if it's friendshippy, but nothing more.

And Sasuke/Sakura is from the devil.

My pairings:
GAARA/SAKURA (Omg, this pairing's freaking the best out of all of them!)
Naruto/Sakura (Only if Gaara's not in the story.)
Neji/Sakura (Only if written well and it has smutt in it.)
Naruto/Hinata
Kiba/Hinata
Shino/Hinata
(My fave out of all three is Shino/Hinata because both of the characters are awesome and Shino needs more love, goddamnyou!)
SHIKAMARU/TEMARI!!!! (Dude, Shika/Ino makes me wanna' puke. don't go there!)
Chouji/Ino

Dude, even Gaara/Lee's okay if it's cute and there's nothing hard-core yaoi.
Not Naruto/Gaara, though. Blech. They may both be frikkin possessed by demons, but that doesn't mean they're meant for each other. BLEEECCCCCHHH...

Characters I HATE WITH A FRIKKIN PASSION:

Dude, fave quote:
"An ace in the hole is good... But two aces are better..."
~Shino Aburame, forget which episode, the one with his and Zaku's fight, the English version of the Anime.

Wow! I can really see that you're improving on you're drawing! Keep up the great work!

hmm yeah well thats what pretty all people went throught while watching naruto..but have you read manga?its very very different that anime ...im still not quite shore but after they killed gaara and then he was alive again/..didnt he loose that sand power because he had his "monster" taken out...

hope i didnt spoil your reading if youre still reading..lol...but i yesterday so ruined my further reading when i saw one manga page on internet..lol...

Hello there! It's me, Lady Naru. Um? a while back you asked if you could draw L. Vincent, If you still want to, you can. ^_^ Sorry It took so long for me to respond, things have been going crazy over here. ^_^;; And I just wanted to tell you I'm about to put up a pic of Little Vincent without his mask on, so yea...If you wanna look. Thank you!

Thank you very much! And yea you can draw L. Vincent if you want to! ^_^

Hey! ^^ I'm so glad you like my story! I've got two more stories if you would like to read them? But for a while I'll be working on ROTP, so anyways thanks for reading and giving feedback!

Shank-you fer teh comment on meh ladeh... you're right, I did leave that out! woopsehs! XDD
Go to page: 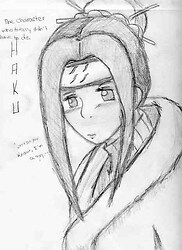 The Character who totally didn't have to die!!