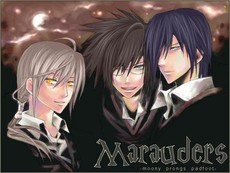 Medieval stuff just ROCK HARD!!! I LOVE knights, castles, SWORDS, armor, you know the whole suh-bang. I own two sword right now and currently in process of acquiring the third. One is the Godric Gryffindor swords from the Harry Potter series. The other is a short samurai sword; the hilt is blue and gold with dragons and the sheath is all blue with gold details on the ends. Also, I'm trying to get a suit of armor (it's not going so well!). I've always thought chain mail armor is really cool so I'm learning how to make it. So far, I'm terrible at it!

House, M.D. is just the most amazing medical T.V. drama there ever was, is and will be! Chase has to be be favorite character so far. Even with his terrible childhood he still manges to uphold himself and take care of patients on a daily basis. House would, of course, come next. What with his witty, yet cruel, humor who couldn't help but love him.

Fantasy is just waaaaay AWESOME!!!!! It's my favorite thing to read, watch, write and draw. I mean, who wouldn't like dragons, vampires, werewolves, elves [NOT the short kind; the kind like in LOTR(Legolas RULES!!), and magic? My favorite fantasy books are Harry Potter(all), Lord of the Rings(all), Inkheart/Inkspell, Dragon Rider, Inheritance Trilogy, The Dreamtime Series, Obsidian Trilogy, Now You See It, and a lot of others.

The Marauders are just the best characters in the whole Harry Potter series. Well, maybe not Peter... He sucks... Anyway, Remus Lupin is my favorite Marauder. Next comes Sirius Black and then James Potter. Remus is just soo cool because he's a werewolf and everyone hates him. He has to go on with his life even though many people wish it would end. He holds himself up high and strong. I must admit I love stories that play on the underdog or people who haven't had the best childhood. Maybe that's why I love Sirius and Remus so much.

I would go on to tell you what kinda music I like, what movies I like, what animes I like, why I like them, and such, but that would take too long so I'm just gunna skip that part. Actually, I could probably find a lot more stuff to ramble on about, but again I won't. So with that I bid you ado and hope you will read/look at my stories and/or drawings(that is if I put any on here).

it is not amazing, it kinda sucks

psh its sucks and you know it

cool!!!!!!!!(sorry for the late comment)if you want to be in me and my cousins club(it's a werewolf club)tell me your werewolf name.(keep the club private)

yes they are hard work to take of

or because i dont no how to stop once i start

no ur just a really good writer