©
This North American short haired red fox can quite often be seen stretched, or sprawled out at his leisure, gazing upon the inhabitants of wherever. His usual drab green eyes giving off a sparkle when eyeing anything of particular interest or mischief. Standing at roughly 6 feet tall from toe pad to furrowing brow, his pointedly floppy ears give him that extra bit of height and alure that he so enjoys to flaunt.

Like most all foxes, he's covered in a luxurious coat of orange n' cream, much like the delicious beverage, but better! His orange rustish fur extending from the black tips of his ears, past the thick 'chewable' scruff, heading earthward from his back and rump to the white brush tip of his thick, but not too bushy of a tail, down his legs and arms to end at his charcoal colored fox socks and mits. The vulpine taking pride just as much over his well groomed creamy vanilla white fur dropping down from his lips and lower muzzle to his chest and belly, extending to the recesses of his inner thighs.

Usually this vulpine can be found squirelled away in a niche in his favorite tree, usually ones commandeered from it's previous occupant. If only for the reason to cause a bit of trouble and of course to curl up in a big fox ball on top of an all ready warmed up bed. And all ways to rummage through any and all unmentionables in the underwear drawer. Nosing some stray socks and raiding the pantries.

All in all, FoxTrot seems to be yet another one of those gloriously wonderful foxes that grace the world with their presence.

There's no true backstory of any sorts to Sir Trottems here. He is me, and I am him, and I play him accordingly (My Fursona >:3). Which usually tends to be rather flakey between the both of us. I'd like to think that I am in no way the hardest person to get along with or at the very least aquaintience with, yes, that would be the word, even if it isn't a real one...yet! I do enjoy all aspects of being a furry, and more importantly, playing with all furries/scalies/avians and the like. I'm more than willing and truly open to all means of play and contact with anyone. I have very few taboos. For those of you that don't know me, I am an artist, I do draw from time to time, as far as I've gotten with vore, though, is the picture above with the ice cream, but even that managed to escape the ferocious fox hunter! *Fails!* >:'C And of course for those of you that all ready know me, I'm sorry. A thousand apple-ogies.

Thanks for the fav. You have a cool gallery.

Sorry I haven't added you yet or been on Xbox Live lately to beat you in Halo..but I have to get Live at "my" house like in a few days..I have it at my cousins house, but not mine >_>

Hey, FoxTrot^^ I sent in your commission yestruday, and once again this morning, just to make sure Yahoo doesn't screw up. But in case you didn't get it, I want you to know that it is finished, and I'll try to send it again.

Holy shoot, you have Xbox Live.
Go to page: 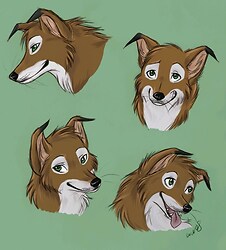