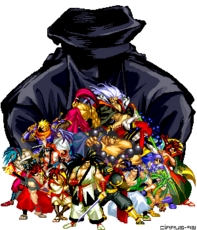 I'm afraid now I've got to start off with a bit of an update on my personal life, I've been engaged for a little over a year now. I love my fiancee and my soon to be step-son (he's an artist too, so soon I'm going to help him set up an account). but, I've got the responsibilities of a parent now, that plus the fact that I'm still in College doesn't leave me with much time to draw anymore, but I hope to submit as much as I can, especially in this last year of College where I really need to add to my portfolio.

As you can see by my gallery, for the longest time I specialized in artwork created with MS Paint, but I'm starting to use Photoshop pretty regularly, that plus I've been getting a lot of requests for more freehand work, so hopefully I can start balancing out the variety.

MS paint has become a specialty of mine, it's been my signature work for so long, so you'll still see a lot of MS Paint work on my gallery in the future. I'm a big anime fan, and a classic gaming fan, but mostly I'm into Nature and try to recreate a lot of what I see into my work.

as far as my Fan-work goes I'm mostly into the obscure, I've done Drawings of well known characters like Ranma and Spider-man and so on and so forth, they don't grab me like these lesser known characters I have a habit of drawing.
Some of you may have noticed there is a fair amount of pictures I’ve submitted that contain nudity. Don’t get too exited, it’s all non-sexual. I don’t have a problem with nudity because I’m a naturist and believe that the human body, in any form is not something to be ashamed of, but celebrated. And yes I did say the human body in any form, that’s why I don’t strive to make sure all my drawings look like supermodels.

It is estimated that up to 800,000 people are taken from their homes and families and forced across international borders each year, while millions more are trafficked within their own countries. Eighty percent of the victims are women and girls.

According to the US government, approximately 14,500 to 17,500 people are trafficked into the United States each year. Worldwide the sale of women and girls are becoming as common as the sale of illegal drugs and weapons. While most victims are from the poorer countries human trafficking is not just limited to victims of poverty, and no country is Immune.

Victims are often from poor countries and have been deceived by promises of a better life. They are instead violated of their human rights and are enslaved or traded for money, often they are sexually exploited in brothels, strip clubs, massage parlors, or escort services. Human trafficking, however, is not just limited to victims of poverty, and no country is immune.

Please educate yourself, many people are surprised to find that slavery still exists and is going on inside their countries borders. Tell your friends and family, once you know the facts, educate them about this human rights abuse and urge them to join the fight to stop human trafficking. Contact your elected representatives; they need to hear from you. While some laws exist to combat human trafficking, more needs to be done. And finally, be on the lookout for signs of trafficking.


Fellow Artists: Please help raise awareness of this horrible violation of human rights. Draw a picture and include some facts. With your help we can spread the word and help to end human trafficking!

I wanna request can you drew me and Zane together please?

oh? so how are things going with your fiance and son? ^^ good i hope. im pretty sure everything is going good..>.> but its always nice to ask ^^;; =DDD i found out i have a B in speech class! omg im soooo happy *w* i hate speach class...but im a people person and i like to speek infront of everyone..so...x3 ya know

KUROKO-SAN!! *tackel* =DD oi oi it has been a long time, ne? heheh *sticks out tongue* meeeh i havent really been up to anything...school has started so im doing school work more than anything...i guess thats a good thing though, huh? meh..anywho...ive been trying to improve my drawing skills...so far im doing okay...but...meh..i dunno...=/ how have you been? ^^

oh dear...to tell you the truth..i thought you were gone for good ;-; so i just stopped the art trade...ill redo it now i promise...it may take a while though cause i need to get a scanner...but i promise youll get it...*glomps and huggles* im so glad your back ^^ i misseded you kuroko-sama
Go to page: