Member Info
Hokay. So. I haven't updated this in almost a year. I don't have as much time to draw as I used to, so I'm posting even less than I used to. -_-;;;

Movies? Yes movies! Phantom of the Opera! Pride and Prejudice, LotR, Interview With the Vampire, Ever After, PotC, Final Fantasy: Advent Children.


Requests! I love getting requests, even if I never end up doing them....>.> I used to have a count up of requests completed and to be done. Now I've just lost count <.<

Congratulations! You have won First Place in the Fullmetal Alchemist Contest! Your prize is an inked and colored(Either colored pencil or photoshop) request. Thank you for participating!

Yah, you should so do a pep or concert band fairy! (ah, the Stein Song.. duh! haha)

heya, your artwork is amazing ^^
Go to page: 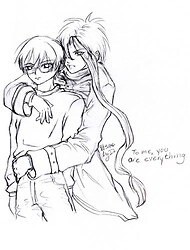 To me, you are everything (Sketch)