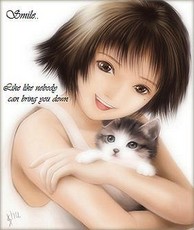 Okay seriously people stop doging me about crediting! I have no art that needs crediting! If I do it's got the credits so shut the hell up about it! Art I drew is mine and mine alone thus needs no credit. Art I drew from a picture HAS credits! Art that doesn't, but comes from a book has the credits in the summary! Any other art either I don't know where I saw it or it's not from anywhere at all! So shut the frack up and leave me the hell alone already! Go bother people who're actually breaking the rules!! I have nothing that needs crediting cuz non of the uncredited work has anyone else to take credit for them!!! They're my creations! The angel and her pet and the skater boy ARE NOT FROM SOME ART BOOK!! I DREW THEM MYSELF! I USED A BOOK ON CHIBI BODIES TO LEARN FROM BUT DID NOT DRAW THEM FROM THERE!!!!!!!!!!!!!!!!!!!!!!!!!! The angel and pet are my own perfectly original idea and are draw AFTER A REQUEST! I followed that person's SPECIFIC ORDERS! She wanted an angel with umbrella and a demon kitty girl in chibi form! The skater boy was an honorary mention gift pic!!! I made it myself! I drew it all and it was hell to do! So shut up about credits!!!!!

I know it's Fei-kun but this is honestly what I would look like anime style only I'm a girl!

I make requests and prices for contests of the following:
Gundam wing
AVATAR the last airbender!!!
yugioh
beyblade
yu yu hakusho
inu yasha (haven't done that before but am willing to try)
DNAngel
Dragonball/z/gt (been a while)
digimon
naruto
medabots
megaman
pokémon (my brother forces me to draw those)
sonic
Harry potter (anime style mostly chibies)
Full metal alchemist (Alphonse as he looks in the FMA movie (not the suit!!!) or anyone from the show in chibi form only)
Original characters (detailed description please!! the more detailed the better the end result!!)

I noticed O.O but why? IT wus so awesome why are staff people so mean to remove it?

Please a picture of The Powerpuff Girls. http://images1.fanpop.com/images/image_uploads/The-Powerpuff-Girls-powerpuff-girls-874638_445_285...

Will see what I can do. Does it have to be that style or can it be anime style too? Also as I'm sick I don't currently have access to the scanner thus can't yet upload it today.

How about anime style!

I don't think so. Deleting comment. Stop posting links on my profile. It's rude, annoying and it won't make you friends.

Hey I want a request can you drew a pictare of me and Zane please?

Sorry, but right now I'm in the middle of moving out of my parent's home. I can't take requests at this moment. I'll be very busy away from the net for the next month to come. Sorry again. The moving came as a surprise for me too as I was told not to expect to be assigned a rental home for another 7 years.

Then you have good taste! ^^