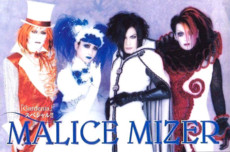 
my name is liza (not lisa...some freakin how people think the z can make an s sound @-@ (pronouced lie-za)i know it european but damn...). i'm really hard headed and i have anger issues. i like cusing. i try and act as polite as i can so please excuse me as i over react to something or say something thats out of line......^-^

hobbies: drawing, computer work, taking to friends, being on the computer, being a BIG pervert and a few other things.

dreams: to rule the world....and be a great artist....and to date and possibly marry bill kaulitz of tokio hotel....

Facts about :Liza
Full name: Liza A. Smith (i <3 my intials...L.A.S. lol)
Occupation: computer graphics desighner
Date of Birth: March,26, 19**
Place of Birth: florida....XP
Height: 5 foot 7
Weight: not your biz
Favorite Colors: yellow,black, and orange
hair color:black
Natural Hair Color: Dirty blonde
Eye Color: blue
Zodiac Sign: aires
Nickname(s): lizard and near
Siblings:joesph c. smith (older)
Mother: florence
Father: birth father paul. step dad scott
School: high school
Favorite Subject in School: Arts
Hated Subjects in School : Math, Physics, and gym
Hobbies:drawing, computer work, taking to friends, being on the computer, being a BIG pervert and a few other things.
Idol: hmmmmm....dont really have any...
Favorite Music: Tokio Hotel, Marilyn Manson, Green Day, Pink, paramore, Coldplay, system of a down, linkin park, simple plan, and The Rasmus
Some favorite songs: Tokio Hotel-live every second & Green Day-Boulevard of Broken Dreams
First album ever bought: Tokio Hotel (seriously, never bought till they came into my life)
First concert ever been to: aaron carter
Favorite movie: The Labyrinth
Pets: a jack russell named ling-ling and 2 cats named kaname and sazuki.
Distinctive signs: Two piercing's: one on each ear. one tattoo: one of the tokio hotel band logo on the back of my neck
Motto: life dies in a flash so live it while you can....
Favorite drinks: Strawberry Nesquik, most herbal teas, and some liquor drinks....beer not so much...
Favorite foods: Pizza, big macs, and Sirloin Burgers.
Personality:shy, talkitive to the people i know, annoyed easily, and laughs at almost anything
RANDOM FACTS:
*hate mattXmello melloXnear! >:[
*love beyond birthday
*i'm very unathletic. i like to sleep but not much (love stay up to 4 and waking at 12)
*my shoe size is a 10: US
*im afraid that me and my friend victoria will get in a big fight and never speak to each other again
*i dont like to were makeup but love eyeliner on guys
*not allergic to anything as far as i know
*hates most seafood
*is right & left handed but better with right
* kinda superstitious
*hates regular milk(likes 2%), grapefuit, milk chocolate(loves extreme dark chocolate)
*hates when people bite their nails, but when nervous or bored i do it myself
*i'm afraid of certain insects, especially spiders
*walking with my cousin in walmart and everyone said they thought my son was cute (first it was my cousin and he was a she....and shes 11!)
*sleeps in clothes worn that day.
*i dont like liars and unreliable people
*i find it hard to trust anyone, even my parents
*i want a few more tattoos, a tattoo of one part of the lyrics in "live every second", and some other things
*If my friend victoria tells me somthing i think about it for days....
*i listen to tokio hotel when i paint or draw.
*When i was little, i wanted to be a bass guitarest, still do
*has a green motarola razor with a skin of bill on it
*i dont want my boyfriend to be shorter than i am
*loves guys that scream at concerts
*likes to sew
*hate to talk in crowds....or anything in crowds
*hate when people only give you parshal info. or dont tell you all the details
*perfect vacation: go to germany, and see tokio hotel live
*love germany
*talks bad german but working on it >////<
*loves to watch scrubs
*thinks the schrei album by tokio hotel is utterly amazing
*loves Marilyn Manson
*doesnt really like to dance but my friends kinda make me

Yeah. And now my boyfriend's home for x-mas so...it's amazing over here.

finally got my modem up and running. gonna be online a lot more...A LOT
neway.....yea

not much I have a new account ;DD ToxicCandyHearts how are you?
Go to page: 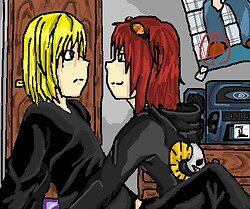