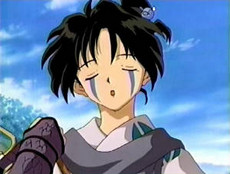 Name- not telling you, and it's not that important anyways
Age- 15, which makes me a lowly freshmen *cries*
Gender- take a guess (it's not that hard to figure out)
Eye Color- they're green with a bit of brown in them

MY FAVORITE ANIMES! IN NO REAL ORDER!!!

There are other animes that me will watch, if they're on, but me is not a into/obsesed with them, like and Pokemon (the best epesodes where the first ones when they still just had the origonal 151).

As far as mangas go, me will read anything me can get a hold of, like Naruto, Bleach, One Piece, Get Backers, Shaman King, Evangelion, Kuro Gain, Fullmetal, the list goes on...

Couples Me Has A Serious Obsession With:

Naruto X Hinata
InuYasha X Kikyo
Jakotsu X Bankotsu (and also a little of Jakotsu X Inu on the side because it's hot, but dont tell Bankotsu!)
Zabuza X Haku
Ichigo X Rukia
Ed X Envy
Shinji X Asuka
Ash X Misty (me likes it just enough to get it onto this list)

Other Couples That Me Likes But Is Not Quite As Obsesed With:

-Naruto- Naruto, Hinata, Gaara, Kakashi, Zabuza and Haku (they're both so kick @$$ and now they're dead!!! TT_TT), Yondaime!!!! Shikamaru, Temari, Kankuro, Shino, Itachi, Kisame, all of the Akatsuki really, Dosu, Kabuto, Anko, Gai and Rock Lee (they're both so dorky it's hard not to like em), Gekko Hayate, and me thinks that's everyone... me might be forgetting a few... you know... me likes so many people from naruto, it might just be simpeler to put up the people me dont like...

-Full Metal- Ed, Envy, Maes Hughes (i was sooooo sad when he died...) *sniffle*, Greed (why did he have to die!!! Why... *crys*) Scar (same thing as for greed and maes), Lust, Hohenhime, Pride, Al, Winery and Dante are pretty cool too

Straight Cougar is the most awesome character in all of s-CRY-ed!

There are still so many people me wants to put up.

i love sour gummy worms... the're my obsession... well one of them at lest...

THINGS I LIKE
-candy
-strawberries
-yaoi
-the idea of gay wolf sex (shut up, blame hormones and ss125 for introducing me to the idea)
-my fav couples
-my amimes and mangas
-my friends (your not one of them so get lost!) =P
-my music
-being random
-confusing people
-sleeping in class
-spreading the love
-fluffy things
-kittens (we have 2 now!)

THINGS I DONT LIKE
-sk8er punks (i dont know why they just bug me!)
-anything school related
-not seeing my fav couples together
-paying attention
-people who think they're all that
-forgetting what i was going to say next
-doing homework
-comercials
-rap
-sasuke: kick the sasuke! XD well, its not that me hates him... me just dont like him almost all of the time. me only likes him when he's out of character; like when he's got the whole wtf... look going.
-I absoultly HATE it when Hinata is coupled with anyone other then Naruto... I HATE IT SOOOOO MUCH!!!! come on people! how the hell did you come up with Sasuhina?!?!?!? how the f#ck did you people come up with that!? and Itachihina?!?! what the hell! at least kibahina and nejihina make some sense... but me still hates them!!!! and gaara?!?! how the hell could anyone think hinata should go with Gaara?!?!?!?!?! It just dosent work! have Gaara and hinata even talked with each other? Ever!?

oh my god you are the best writer I've ever seen! *o* I love your EnvyxEd fanfiction and I hope you continue it...;___;

hey if u r a giaian PM me, sheath hyuga k? ty

That's nice that you had a good religion class, was it world religion, or the Christianity? I loved World religion >.< omg, your poor friend, religion homework has got to be the worse, it gets so repetitive...

Ok, I have the most random things that I have to share with you. My brother delivers newspapers, but he's gone for two weeks, so I have to do it for him, so yesterday I was delvering them. I was running from house to house, then I tripped on this stupid cement path in the grass (who thought of that) and now I have this HUGE scrape on my elbow, I think I bruised my bone, and I scraped my hip, and bruised my knee. All on my left side. It looks so cool. No matter how much I hurt myself, I can't cry. I have some weird pain tolerance...anyways, then before I went to bed, I saw this giant spider that made itsefl at home in my wire for my laptop. It as actually huge. I freaked out, and took the vaccum, and tried to suck it up, but it ran SO fast. So I was just there, screaming my lungs out (it was almost 12 at night) and stabbing the floor with the vaccum. THEN it ran under a pile of papers, so I ran in my parents room screaming that there was a spider. So my dad came and killed it. Seriously, my heart rate tripled. And at work, there was this big airy spider on a shoe, and I was just staring at it in horror, then it jumped. Literally, the shoes were at a 15 cm distance, and it jumped. Scared the life out of me. AND I bought spray paint in Europe for like 4 bucks a can. Who knew it would be so cheap?? My mom asked me why I needed spray paint, even though she knew why. I told her graffiti, and she just rolled her eyes at me and said “Don't get caught.” XD Last thing, me, Gorya and my sister were just relaxing, I was trying to unblock a program on my laptop, but I couldn't because of the Windows firewall. So I said "The stupid firewall is blocking the probram!" My sister said "Who's blocking it?" So I said "You know, I literally just stuck my hand in my hard drive and blocked it." So Gorya said "OMH!! A HACKER!" It was absolutely the funniest thing ever!!
Anyways, those were such pointless things to share, but I had to share them. ^^
This felt good *sigh* I always love writin these long comments to you <3

Hello person! Or whatever sentient life-form you are. I like your story, 'Happy?' and i am BEGGING you to write another chapter. Please! *Gets on knees* Pleeeeease?
Go to page: