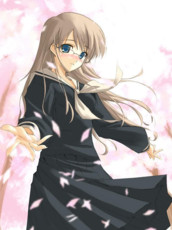 EDIT: July 3, 2009
Oh...my...god. I wouldn't have even remembered this thing was here if it weren't for the fact that I kept getting messages about my favorite artists here updating. >.> Actually....strangely....HybridSunshine and BlackGargie are the only ones I've been getting messages for. Did the rest of you drop off the face of the earth?

ANYWAYS....my art has gotten a million times better since you last saw me, and I'll be showing you that fairly soon. Promise. HOWEVER, I'm still mostly on DeviantArt, so if you wanna check me out there, I'm OsakanXKira, okay? I'm a lot more active there...


Fullmetal Alchemist
Detective Conan (Well, trying. Money's a little tight.)
The Mysterious Benedict Society
Dominic Deegan
Charby the Vampirate
SGVY (Sparkling Generation Valkyrie Yuuki )
Just about ALL the Marvel movies. (Want Deadpool movie, plz. WANT! )
Harry Potter (sorta. I'm not too thrilled about Ron/Ginny. It came out of nowhere.)
Neoyi
Dexter (Sort of. I hear it got cancelled because the producers realized, despite all the good things Dexter may or may not end up doing, HE IS NOT A GOOD GUY. He really isn't. He's a psychopath who hides it very well.)

Doushootemo Aishooteru A comic I intended to start up about four or five years ago. After accidentally killing an alien princess, Rei Nikata is forced to house the princess's spirit in his own body until her body can be rebuilt. Unfortunately, the princess-Vera by name-loves guys too much to let her position in Rei's body stop her from having fun, and regrettably, at an all boys school, there are all too many opportunities for her. Originally meant to be a comic, I believe I'll try to turn it into a boys love dating sim when I get better at Flash and finish drawing up the designs for Rei's class. (I have the main characters and Rei's roommate drawn so far. >.> So far, only Vera and one guy aren't in Rei's class. CLASS 1-C FOR THE WIN!! )

And a few other I can't think of right now. But these are the ones I'm working on right now. And they're both original, my own ideas, so...no stealing. (However, if you'd like to put a character of your own in the school for Doushootemo Aishooteru, then I'll show you the uniform for you to keep in mind, and I'll probably end up adding your character to the cast of potential characters/suitors for Rei. That sounds awesome, right? Just keep in mind that it's an all boys' school-no Hana Kimi schemes, okay? Although, if it's well-done, and your girl truly is androgynous, then I might allow it. Just don't give me too many of those. I'll allow a maximum of three at this point. It shouldn't be that common a thing...it really shouldn't. AND you need a good reason for having your girl sneaking in. REALLY good...I mean it. So drop me a line if you have someone you'd like to drop into Doushootemo Aishooteru, and we'll have ourselves a little talkie about it, promise.)

Ahh... Hot dogs, ice cream, and blowin' stuff up balled up in a single day. Gotta love America. XD Fireworks are so awesome. A nearby town had some yesterday and we went to those, so we're takin' a break today. ^____^

Happy 4th of July! *waves sparkler around & carpet catches on fire* Gah! *stomps it out*

thanks that's nice of you.

Okay! Onwards to the Kabuto kitty! Oh, and want to be friends? :D

Mmmm ... I can draw your favorite characters from a TV show as kitties! :D What do you want? *takes out pen and paper*

Wow, thank you so much for the Kitsunenomen drawing! It's so nice! I really want to draw you somethin' now...

Wow, you'd actually draw Kitsunenomen? o.o
That's pretty nice of you. Do you want me to draw anything for you? Oh, by the way, thanks for the comment.

I don't know what my OC picture was doing in the Gravitation section. FC moved everything--not my fault they screw up on placement of images.

Hey!
I like your picture of the "I'm Smokin'" cat! I submitted a picture similar to yours for you!