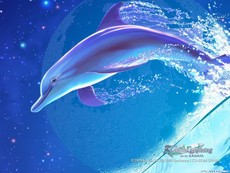 Here's dolphinprincess, and whatever stuff about me.

I used to be a big anime fan. But once I saw the last episode of Inuyasha, I finally dropped the faze. Because of this, my mind has opened more to story writing and drawing ten fold. That, and I realize the question, "Why the heck was I so obsessed with an imaginary character from a cartoon?" From now on, the only characters I'll obsess over are my own.

Currently, I am proofreading over my first story, 'Iridescence.' It consists of thirty chapters, and over 220 pages (last time I checked anyhow). The story classifies as fantasy/sci-fi, with enough magic, blood, and love to satisfy. The age group is approximately teen-young adult. It's got some gruesome scenes, and a few of the characters aren't necessarily G-rated. I will be one very happy person once I get all of the checking over and done with.

When I work on the computer, or if I'm drawing, I'll listen to music, such as:
-Nickelback
-Papa Roach
-Three Days Grace
-Default
-And a bunch of other rock/punk music, but these are the top four.

I don't particularly watch hundreds of movies, but I'd say that these are the ones I enjoyed out of what I've seen:
-The Lord of The Rings Trilogy (all three movies were good)
-The Pirates of The Carribean series
-Eragon
-The Chronicles of Narina;The Lion, The Witch, and the Wardrobe (I also read the series when I was younger)

Obviously, I am a fantasy fanatic. This is probably why my story is fantasy genre.

I don't play too many video games, but that's probably because there aren't a whole selection of good rpg games for the Gamecube. Anyhow, here are some games that I have played and enjoyed:
-Tales of Symphonia
-Skies of Arcadia Legends
-Legend of Zelda; Twilight Princess (actually, I didn't play it, my brother did. I only hung around, watched, and gave out pointers to help him out)

The games I really want to play are the Final Fantasy series.

As of now, I am doing a little 'spring cleaning' in my gallery and profile. At the moment, I only have 16 out of 145+ pics left. I'll add more gradually, mainly ones that are of my characters (the old character ones I deleted were seriously outdated). I'm still not 100% satisfied with what I have left. As well, I'm going to do some work with my stories. I'm pondering whether or not to place up a few of my story's chapters.

*shrugs shoulders* Starting over is pretty difficult to accomplish.

Trapped in a Reality Show
Wut The ToS Characters wouldn't say, Or Do
27385990

Hi! I'm back! I hope I get to see more of your work again soon!