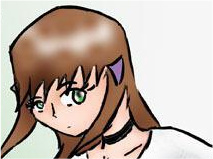 I'm inu43 (not revealing real name =P). My friend showed me this website and so I joined (wonder who that friend could be...). I'm pretty much into anime as you can see and love to play video games. RPGs are the best! I love to roleplay a lot on the internet and in real life. When you're around friends who roleplay it happens.

Trophy made by Bio of Pokedox.

Anime I'm Currently addicted to is:

Tales of the Abyss The Animation

Currently working on my own manga. Yeah, it's never going to be public, but nothing wrong in making one.

Roleplay with me anytime. I'm usually always in a Roleplaying mood.

grrrr you, did you ever get a damn phone already!!!!!, btw, its raeven

You went to Otakon?????? AWESOME!!! sounds like the highlight of your vacation =)

i love inuyasha (the show ) hiz