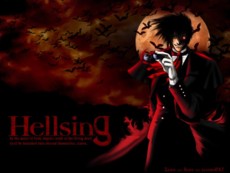 
Hellsing is now my favorite manga ever! It's got a great plotline, awesome characters, and intense battle scenes. however, Hellsing is definitely not for the faint of heart or the weak of stomach. Hellsing is pretty graphic when it comes to violence, and the undead. So, if you can handle the violence, moderate/explicit profanity, some sexual referance, and you are a vampire lover like myself, I recommend that you read this manga. And if you'd rather watch the anime, the OVA series is closer to the plotline of the manga, but there are only four episodes out. Those four episode cover volumes 1-4, and part of volume five. The original series is complete, but the plotline is greatly different than the manga's plotline around the middle.

Shadow Does Community Work
Interviews with the Inuyasha Characters
Like a Double-Bladed Knife
Well Ya Had to Expect It!
40852411455204247151

SOLVING LIFES MYSTERIES WITH SESSHOUMARU!
100 things to do in class when you're bored
195919296

xD EEEEEEEEEEEKKK!! I'm being swished! :D AH! But if it's by you, being squished is perfectly fine! *smiles as she is violently swished* :D

xD YESH!! Rubber dickies are cute at FIRST, but when you see their true nature, you will harness the fact that they are evil and perfect for the use of world DOMINATIIIOONNN!! O_O *Echo*

O: OHH!! You can download a free program called GIMP that is like Photoshop!!! X3 I bet it works good with a tablet! -OR YOU CAN DOWNLOAD THE VERSION 1 OF OPEN CANVAS! That's free too!!!

But the tablet news has made me ahppier! >:D I WILL BE HAPPY!!! HYPER!!! AND HOOTILICIOUS!!!

XD EHEHEH!!! Thanks! How have you been?

whys that
Go to page: