Stop criticizing me for crud I drew how many years ago, I've left and I've been off this site a long LONG time. I'm on dA now, where I draw more original stuff.

All the content here is OLD. As in, if I drew like this now... I'd probly stick it in my scraps!

I'm sick as heck from people going "OMG, THAT'S NOT THE COLOUR OF HIS SHIIRT!! IT'S RED, NA NA NA NA BOO BOOO..." grow up, seriously. I saw that show when it first came out, and all I had to shade with was a limited number of colouring pencils. So please DO NOT expect uber-good stuff from me, I'm not a legend, and do not wish to be.

Look at Genndy Tartakovsky, I consider the man a god. And his stuff isn't 'perfect' but yet I find it beautiful.

[Hates]Okay...posers, aracnids(they're pretty, but not fun!), Jack Of Blades(fable), Maze(fable), preps, maths, chemistry, Vogons, the prophets, the Flood, the fact that I know I will never ever get Xbox live *whines* Zombies(though I do like them!)

I love Halo, and I was a total-radical fan ‘till, like every other phase, it kinda died. Though I do still love the chief and can talk for endless hours how ‘Romping Hunters’ is sooo damn educational! I have the ‘Fall of Reach’ book, an old Master Chief figurine, and two giant posters of zeh Chief, I also have the art book, with it’s pretty pictures!
--------------------------------------------
[Cartoons]
-Megas XLR
-Xiaolin Showdown
-The CLASSIC Transformers!
-Edd,Ed n' Eddy
ETC: Dave the Barbarian, Samurai Jack, Justice League Unlimited, Johnny Bravo, Angry Beavers, X-men: Evolution,and old skool Teenage Mutant Ninja turtles!

I tend to take requests, as long as you are detailed! I can't draw from you know… three words alone!

To find something else to be a total fan at, ‘cos nothing’s that interesting anymore! I FEEL OLD!
Start role-playing again!
[/font]

I bounced in to say hi back XD
(It's about a year late :P)
Love your art, I'm on Deviant Art too now XD

i was wondering if you would like to do a request or art trade???

Needler, I didn't know you liked Darkwatch! Another game besides Morrowind that we both play! I beat Darkwatch. In both settings. I think Cassidy was more trouble than Tala, though. Fell the wrath of the suicidal Keggers! I positively HATE the Oozers. 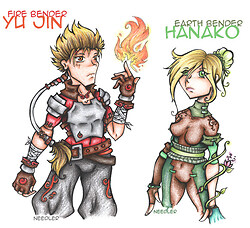