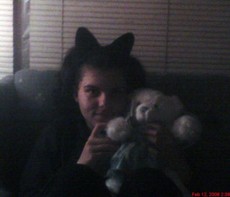 Okay, so you wants to know a little bit about Tabi? Well, you've come to the riiiight place! hehe =D

Lets seeee....Mah name is Tabitha, but I likes to be called Tabi (Tabby) or Cookie...I don't know why I like to be called Cookie.

I have a cell phone, but you have to ask me to have it, and I have to know you pretty well before that happens. (And it's verizon so if joo has verizon then i can talky till mah battery dies X3)
I don't just talk on the phone to anyone though, so...HA! hehe.

Tabi here is half Irish...peoples it's a long story and I just really dont want to explain...one day I will. Maybe next Tuseday, who knows. Me lives in Pennsylvania, I use to live in Florida...for ten years...but my family moved back to PA.
Me ish a fangirl of Jesse McCartney!! *squeels* I Wuv You Jesse!!!! *ahem*

Some of my favorite pictures:

You can mostly talk to me on YIM, MSN and GaiaOnline.com!
Well, that's all for now, bai-nee!

Hello! In case you were wondering, i have a deviant-art account and a myspace account, not to mention email, in case you want to contact me! (seing im not on this site often)
haha anyways yeah

hey can you do me a favor? can you read my story, "Return of thefayth?" i just wanna know if my story sounds right. it would be a bighelp

*gasp* wow!
tabby really isnt that popular of a name, i was getting lonely XP

im having probs w/ my scanner....syr

Uh...I think i draw ur chracter and you draw mine.

I'm glad you're back! Hope u never leave again *glomp*

so my friend was wondering if u could darw rita and runt from the animaniacs.and if u wanna do a trade we can do that.and this is what she wants in the scene

Rita is in a stream, and can't keep her head above the water.Only her arms are showing, bubbles are emerging, and the words "glub, blub" are shownIn other words, Runt is attempting to rescue Rita from a stream.
thanks~Dani
Go to page: