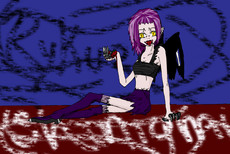 Want more pics? look me up on deviantart.com!
Sozan-Uzumaki919


The End:
"I'm going to kill you!" Naruto yelled as he ran toward Kabuto. He was going to end a part of this war, right here and now. He went to thrust his sword into Kabuto, but as he did, someone got in the way, causing Naruto to strike them instead.
"Wha?" Kabuto asked himself. Sozan had gottan in between Naruto's blade and Kabuto. As a result, Naruto's sword sliced into her heart.
"S-sozan?" Naruto gasped. He pulled his sword out and gathered the bleeding snake-girl in his arms, laying her down in the proccess.
"Don't you die on me," Naruto demanded, fresh tears falling onto Sozan's now cold, white face.
"Na-Narut-to-ku-kun.." she studdered,"good bye.." With her last words said, her voice grew softer and softer before finally going limp in Naruto's shaking arms.

Here's a lullabye to close you eyes..Good-bye...

awsome-ness! I'll be sure to check it out!! 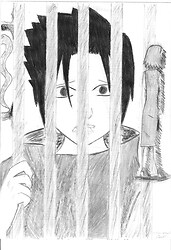 the black-and-white version of my pic for misha94's contest