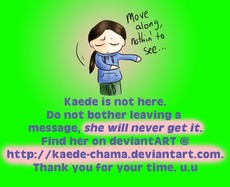 Okay, guys, let's face it. I am never online. I have not BEEN online regularly since September of last year. It's unfair to lead on all the new arrivals asking to be friends and faving my stuff, because really, I never will answer, and my art is much better now than the contents of my FAC gallery ever will be. While I will always hold a special little place in my heart for the site that helped me grow and change as an artist, it is my deviantART account that has let me spread my wings the furthest. To tell the truth, I really haven't been doing any fanart, anyway. Feel free to visit my deviantART account: http://kaede-chama.deviantart.com and mention your FAC status if you have an account there, too. But I can't stretch myself between two galleries, especially since the old one isn't quite as user-friendly. (sorry!! It just isn't! >.<;;)

Goodbye guys, it's been swell.


[strike]Hey, sorry I haven't been doing much on here, I've been busy. BUT! I got a deviantART account! You should see it, it's spiffy! http://Kaede-chama.deviantart.com

GUESS WHAT GUYS?! I NOW HAVE TWO FANFICS! YOWZERZ! They're called, "College Days" and "Kagura goes to Poetry Class." They're both Furuba fics.
...
Hello! I'm Kaede. I like many manga and anime, Fruits Basket being the number one fave, (I'm a Kyoru shipper!!) but also including (but not limited to) Ouran High School Host Club, Kamichama Karin, +Anima, Pokemon, and Tokyo Mew Mew. I also like most American cartoons, though I really can't draw them as well! ^^; These include Invader Zim, Danny Phantom, (I shall miss yooou...T^T) SpongeBob, My Life as a Teenage Robot, ANIMANIACS!! and, uh, lessee here, well, basically anything on Cartoon Network or Nickelodeon not mentioned here. XD

Okay! Who here has seen Doctor Who? I LOVE that show! And Mystery Science Theater 3000! Kids in the Hall, too.

I read normal books, too! Here's a list of my favorites...
•Harry Potter
•Discworld
•Redwall
•Tuck Everlasting (Disney totally got it wrong in the movie!)
•Inkheart (I got Inkspell! Have yet to finish...)
•the Space Race books
•ELLA ENCHANTED! I've read it maybe... 5 times?

I just LOOOOVE Guster!! I already have their latest album, "Ganging Up on the Sun," completely memorized, and I was just at a concert of theirs! If you like Guster, please tell me so I can geek out anbd become your friend for life! *gibbers*

I also like...
•Foutains of Wayne (they did Stacy's Mom)
•Puffy AmiYumi
•Green Day
•Steadman
•Natasha Bedingfield
•U2
•The Go-Go's
•The dB's
•The Odds
•INXS
•Bis
•The Beatles- oh, lots of stuff.

Nilla Wafers for anyone who has actually read this far! As you may realize by now, I constantly update my profile, so check in every once in a while, it'll prolly be different.
Please comment and look at my stuff! It boosts my confidence. ^_^;[/strike]

Hiayh! great art! love your gallery! Oooooooo you like Invader ZIM too? cool! I luff it! want to be friends?
Go to page: 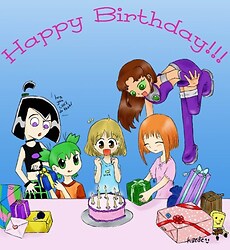